The man who is bringing cryptocurrencies in from the cold 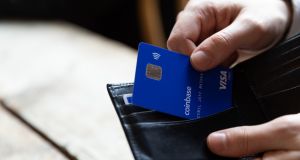 Cryptocurrencies such as bitcoin are becoming more socially acceptable, with Central Bank-backed digital currencies likely within the next 10 years.

That’s according to Zeeshan Feroz, UK chief executive of Coinbase, a digital currency exchange whose backers include Spanish bank BBVA and the New York Stock Exchange.

Speaking to The Irish Times on a recent visit to Dublin, Feroz said that despite the hype and volatility surrounding bitcoin, crypto is becoming a “valid proposition”.

“There are still those who are sceptical, but I think that cryptocurrencies have been such mainstream news for the last couple of years for all sorts of reasons, and the key thing with that is that if people are talking about it, then they are also learning about it,” he said.

“What this means is that it makes them curious and as they dig in to find out more, then hopefully they discover the merits in the technology and get to see how it represents a new financial system. So all of the buzz around it, both positive and negative, has been beneficial in helping to educate people,” Feroz added.

One of the most popular cryptocurrency exchanges globally, Coinbase has more than 25 million users across 53 countries with more than $150 billion traded on its platform to date. The reasons for its popularity are simple, according to Feroz.

“We are the safest and most trusted place for people interacting with crypto and that’s why people use us,” he said.

Coinbase was last year valued at $8 billion after a $300 million Series E round in October. Overall, it has raised more than $525 million in funding, with backers including heavyweight tech-focused venture capital firms such as Greylock Partners, Battery Ventures, Andreessen Horowitz and Ribbit Capital.

The company has been in the news of late having just launched Coinbase Card, a Visa debit card that lets customers spend cryptocurrencies as easily as the money they have in their bank.

Feroz said he believes the new card will play its part in making digital currencies morecommonplace.

“It’s creating a bridge for consumers, allowing them to access their crypto in a way they couldn’t do as simply before. They can use the card to withdraw cash from ATMs or to buy a cup of coffee. We think it makes cryptocurrencies liquid in a way that something like stock isn’t, as it allows you to invest in assets but also to use it to buy everyday items,” he said.

Coinbase is to some the acceptable face of digital currency exchange. Last year it teamed up with Barclays in what was the first partnership between a British bank and a cryptocurrency exchange, in a move that also saw the platform being granted a licence from the UK’s Financial Conduct Authority (FCA).

The company, which employs 30 people in the Republic having opened an office here last October as it looks to hedge against Brexit, is only at the tip of the iceberg in terms of growth possibilities, according to Feroz.

“We have over 25 million [users], which if taken in isolation seems a reasonable number. But when you think that actually we’re looking at a new form of money that everyone should be using, then that number looks pretty small,” he said.

“We’re looking at a journey that is going to take decades until we reach a point where the world runs on this new form of currency exchange, and so while we have enjoyed a lot of success to date, there’s a lot more work to be done,” Feroz added.

It hasn’t all been plain sailing for the company. Just last week it announced it was to lay off 30 employees in Chicago as it closed its office in that city.

In 2017, there were lots of scams that came to light, which obviously didn’t help in terms of image

Nonetheless, Feroz believes one of the ways in which Coinbase can thrive is by continuing to try to help build a new financial system from the ground up.

“What we’re trying to do as a business is identify the areas where there are gaps in the infrastructure and building on that,” he said.

Admitting that it is hard to predict exactly where we’ll be in terms of cryptocurrency in the coming years, Feroz says that increased regulation will help dispel the “wild west” image associated with digital currency and help create an environment in which people feel more secure about making transactions.

“In 2017, there were lots of scams that came to light, which obviously didn’t help in terms of image, but much of that has now dissipated and incoming regulations of things like anti-money-laundering will create more trust,” he said.

Feroz added that currently central banks are in different stage of acceptance regarding cryptocurrencies, with some still fighting against it while others are open to it. He expects this to change, with many issuing their own crypto assets within the next 10 years.

“A lot of development maturity is still needed, but at some point in the future we will end up in a world that will have centralised currencies existing in harmony with decentralised ones,” he said.

“The crypto community has to take some responsibility in creating an ecosystem that will deliver on some of the promises related to digital currencies. There is some great work going on in the background to build a system, but we’re looking at such a fundamental shift in terms of how we imagine money that it is not something that is going to happen overnight.”