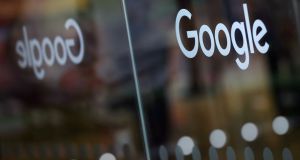 Alphabet said its quarterly revenue rose 17 per cent from a year ago to $36.3 billion (€32.4 billion). Photograph: Hannah McKay/Reuters

Alphabet Inc’s Google failed to reap the benefits of a strong economy that bolstered rivals in the first quarter, leaving the search giant’s revenue below Wall Street targets on Monday.

Shares of Alphabet dropped more than 5 per cent after hours after closing up 1.5 per cent at a record high of $1,296.20 (€1,158.96 ) . Major competitors for ad spending such as Facebook Inc, Snap Inc, Amazon. com Inc and Twitter Inc all reported last week quarterly revenue above or in line with analysts’ expectations.

Alphabet said its quarterly revenue rose 17 per cent from a year ago to $36.3 billion (€32.4 billion), compared with Wall Street’s average estimate of $37.3 billion (€33.4 billion), according to IBES data from Refinitiv.

Accounting for currency fluctuations, revenue rose 19 per cent. The 17 per cent rise was the slowest in three years and compared with 26 per cent for the same quarter a year earlier. The company said paid clicks on its properties fell 9 per cent compared with the previous quarter.

Quarterly costs rose about the same as revenue, up 16.5 per cent from last year to $29.7 billion (€26.5 billion). Expenses have surged faster than revenue for much of the past two years, concerning some investors amid increased scrutiny on the company’s privacy practices and efforts to restrict advertising on potentially offensive content.

But positive macroeconomic signals have given them reason to believe that the company’s ads business is healthy. Shares had risen 11.9 per cent between its last earnings announcement and Monday. About 84.5 per cent of revenue, compared with 85.5 per cent a year ago, came from Google’s ad business, which sells links, banners and commercials across its own websites and apps and those of partners. Google’s 3 billion users help make it the world’s largest seller of internet ads, capturing nearly a third of all revenue, according to research firm EMarketer. Facebook is at about 20 per cent.

Alphabet’s capital expenditures fell 36 per cent compared with last year to $4.6 billion (€4.1 billion). The growth moderated from last quarter as Alphabet had warned in February.

Alphabet has said its spending increases are justified, with huge outlays going to offices, data centres and artificial intelligence capabilities in line with the expected demand for its services. Still, the company has yet to tout significant revenue from its spending on ventures such as self-driving cars and its AI helper Google Assistant.

Newer units that are producing noticeable revenue have lagged in market share, including Google’s consolidated hardware unit and Google Cloud, which sells computing and data storage services to businesses. And Google’s costs could jump further if governments globally follow through on growing threats to rein in the ability of apps to track users for advertising purposes.

Other regulators have discussed forcing companies to step up monitoring of user content. Shares of Alphabet have gained 23 per cent this year, the least growth among the so-called FAANG group, with Facebook at 48 per cent, Netflix at 39 per cent, Apple at 30 per cent and Amazon at 29 per cent.

Alphabet’s expenses included a $1.7 billion (€1.5 billion) fine from the European Commission for having placed anticompetitive advertising restrictions on websites using its searches.

Income also was boosted by a change in valuation of Alphabet’s stake in ride-sharing app Lyft Inc, which held an initial public offering a month ago.

Alphabet could see similar gains later this year as other highly valued startups in which it has ownership, including transport app Uber Technologies Inc and workplace software firm Slack Technologies Inc, make their public debuts.

1 High Court appoints interim examiner to Compu b parent company
2 System agreed for Irish goods to skip checks on UK trade
3 Ireland faces 'deep downturn' this year and may not rebound until 2024 if there is a second wave
4 Second Covid-19 outbreak and no-deal Brexit an appalling vista
5 Why are markets booming when a crash is on the way?
Real news has value SUBSCRIBE