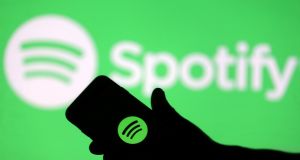 Spotify has reached 100 million paid subscribers, a first for any music service, adding more customers in the latest quarter than analysts expected and boosting confidence the company has lots of room to grow.

Spotify took on four million customers in the quarter, compared with the 3.3 million forecast by analysts. The stock jumped as much as 4.9 per cent to $145.01 in premarket trading.

Last quarter, Spotify doubled down on its podcast bet with two strategic acquisitions – Gimlet Media and Anchor – hoping to drive subscriber growth through mediums outside of music as record labels have begun demanding more money. And since last reporting financial results, the streaming service bought podcast studio Parcast for an estimated $100 million.

The Swedish company is growing quickly but still losing a lot of money. Its first-quarter loss was 79 US cents a share, wider than the 41-cent loss analysts expected. Spotify attributed that largely to higher costs for stock options and restricted stock units, thanks to its share-price gains. Gross margin was 24.7 per cent, above the high end of the company’s guidance range.

The company expects no slowdown in its expansion, projecting 107 million to 110 million premium subscribers in the second quarter and 117 million to 127 million for the full year.

Shares of the music streaming service have rallied 22 per cent so far this year, compared with a 17 per cent gain in the S&P 500. – Bloomberg

1 This charming man: how Paschal Donohoe won the Eurogroup presidency
2 ‘My rent here is so low it’s a joke’
3 ‘Sad day’ for House of Ireland as tourism retailer goes out of business
4 Caveat: The tourism sector deserves to be taken more seriously in this crisis
5 Examinership of Apple reseller Compu b confirmed
Real news has value SUBSCRIBE