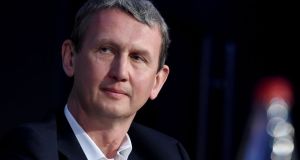 Iliad chairman Maxime Lombardini: he had previously said the regulator’s grievances were “unfounded”

The chairman of French telecoms company Iliad has been fined €600,000 for insider dealing over his sale of shares in the telecoms company weeks before they dropped during the failed 2014 takeover approach for T-Mobile USA.

The French financial markets regulator’s enforcement committee said on Monday it had fined Maxime Lombardini, then chief executive, for “breaching insider dealing regulations”. Iliad must pay €100,000 “for breach of its disclosure requirements”.

The breaches relate to Iliad’s attempt to acquire the much larger US mobile network in July 2014. When Eir owner Iliad surprised the market with its initial approach, its share price slipped 7 per cent, the French group’s sharpest drop in almost eight years.

Weeks earlier Mr Lombardini had sold Iliad shares for himself and his partner, which the regulator said constituted insider dealing.

Iliad was fined for delaying by seven days its communication to the market of its interest in T-Mobile USA. The AMF statement said Iliad waited until “31 July 2014 to disclose that information even though the company could not ignore that, on 24 July 2014 at the latest, it was no longer able to ensure its confidentiality, following which Iliad had failed in its obligation to communicate any inside information as soon as possible”.

The offer for T-Mobile USA, an attempt by Iliad’s largest shareholder Xavier Niel to establish an American foothold, was rebuffed by the US company’s majority shareholder Deutsche Telekom. An improved bid was also rejected before Iliad withdrew its offer in October 2014.

The fines are lower than the regulator was seeking. It had recommended last month that the enforcement committee fine Mr Lombardini €1 million and Iliad €500,000.

Mr Lombardini and Iliad, who have previously said the regulator’s grievances were “unfounded”, declined to comment on Monday.

The fines come at a difficult time for the company and its management. Its shares have dropped by more than a fifth this year, reflecting investor concerns about the highly competitive commercial environment in France and over the company’s ability to generate cash.

Iliad acknowledged last month that it would take longer than expected to hit its cash flow targets, and said it might try to raise cash by selling part of its mobile network.

A foray into Italy, where Iliad is building a mobile network from scratch, has put further pressure on cash at the same time it has to invest in faster fibre broadband in France.

French telecoms magnate Mr Niel used Illiad and his private NJJ investment vehicle to buy a combined 64.5 per cent stake in Eir last year. Iliad has an option to increase its 31.6 per cent Eir stake to almost 59 per cent in 2024 by buying out most of NJJ’s shares. – Copyright The Financial Times Limited 2019