With its stunning quad camera, the P30 will be up to your eye more often than your ear 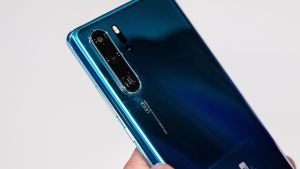 Picture this: The Huawei P30 Pro. You’ll come for the camera, but stay for the overall performance

While other phone manufacturers were extolling the virtues of dual cameras on their devices, Huawei decided it was time to add a third and boost the low light performance to frankly stunning levels. That was last year’s P20 Pro, which was a widely praised success for the Chinese company.

This time around, Huawei has shaken things up a little more. A quad camera set-up makes its debut on the P30 Pro and, not only that, the company has decided to ditch the traditional RGB (red, green, blue) sensor for RYYB (red, yellow, yellow, blue) instead. The logic? Yellow absorbs more light than green. The end result means you get more light into shots in an instant, instead of waiting several seconds for the night mode exposure to finish. Overall it means better photos, no waiting.

But Huawei hasn’t stopped there. The P30 Pro comes with a zoom camera that blows everything else on smartphones out of the water. The Leica lens set-up offers a 5x optical zoom and 10x hybrid, but you can go as far as 50x with digital zoom. Even just at the peak of the optical zoom, things are impressive. Image quality doesn’t suffer, there isn’t a noticeable shake, and the colour reproduction is amazing. Hybrid zoom gets you a bit closer to your subject and still produces amazing images.

Going beyond that, it starts to get a little creepy. When you get to that higher end of the zoom – the 50x spy camera mode – you’ll find things get a little shaky, as you might expect. But the image quality is still good enough that you could use the P30 Pro to keep an eye on someone from a comfortable distance – comfortable for you, uncomfortable for everyone else, that is. That’s not really what Huawei intended, I’d imagine, but it certainly is possible.

There is AI built in that will help identify the different photo scenarios and adjust the settings accordingly. Even if you are the world’s worst photographer, you’ll get something out of this camera, unless you completely cut out your subject. There’s nothing AI can do to help you there – yet.

That AI is carried through to the 32-megapixel front-facing camera, where your selfies have never looked so good. It can go overboard at times, though, and if you whack the “beauty” filter up to the maximum, it gives you an over-airbrushed look that erases lines from your face to give a mannequin effect. Stick to the more natural effects, for your own sake.

It would be easy to peg the P30 Pro as a camera with a smartphone attached, but that’s not strictly accurate. Although the camera is impressive and certainly the star of the show, the phone has other high points. The Kirin 980 chipset is the same as the Mate 20 Pro, and it comes with 8GB of RAM. That puts it on a par with the Mate 20 Pro when it comes to performance, and there is little you can throw at this phone to slow it significantly.

Designwise, the P30 Pro doesn’t really break new ground. It sticks to the by-now familiar smartphone design: big screen, curved edges, as little bezel as possible. The controversial camera notch has been cut down to a small dimple, but the biggest change is the elimination of the phone earpiece. It’s gone, replaced by a new way of distributing sound. Acoustic sound uses the entire display to generate sound. If it sounds a bit far-fetched, it’s not: TV makers such as Sony are using it in their products in your livingroom. Using the P30 Pro, you don’t notice the difference between the new technology and the traditional earpiece.

The display itself is an OLED 6.47-inch screen, with an in-screen fingerprint reader. The latter is not quite as advanced as the one on the Samsung S10, but it works well enough.

The stunning camera, Huawei’s usual excellent battery life, the aesthetically pleasing design of the phone – there is plenty to love about the new P30 Pro. Huawei has taken a great product and managed to work in some significant improvements. You also get the reverse wireless charging option, so your phone doubles as a battery pack for other devices. Sharing is caring, and all that.

If I’m reaching, it’s the EMUI software that Huawei ships with the phone. It is streets ahead of where it used to be, but compare it with Samsung, Google or Nokia software and you’ll find it comes up a little short.

There is a dual SIM version of the phone available, but you can get one that supports external memory cards. The memory card format may cause an issue, though: the nano memory card introduced with the Mate 20 rated, so dust and water resistant. The days of losing phones to a sudden dunk or two are gone – thankfully.

A stunning camera that makes huge leaps for smartphones.