Teamwork’s Coppinger and Mackey named entrepreneurs of the year 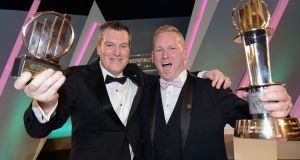 Daniel Mackey and Peter Coppinger of Teamwork, overall winners of the EY Entrepreneur of the Year Awards. Photograph: Dave Meehan

Peter Coppinger and Dan Mackey, the founders of Cork technology firm Teamwork, have scooped this year’s overall EY Entrepreneur of the Year award.

The software-as-a-services company, which was established in 2007, counts many of the world’s most influential companies among its clients, including Disney, Netflix, Forbes, Paypal and Spotify.

Teamwork creates business management applications to make teams around the world more efficient and organised. The company has 22,000 paying customers in total across 183 countries. It employs more than 200 people.

Founded in 2007, it remains a privately owned company that has never received any outside funding. Teamwork aims to maintain the 40 per cent growth it has been achieving over the past few years into the future and is targeting annual revenues of $50 million by the end of 2021, up from a projected $25 million this year.

Mr Mackey and Mr Coppinger received the prestigious EY Entrepreneur of the Year award at a gala event in Dublin on Thursday night, attended by 1,500 business leaders. In addition to being selected as the overall winners, the two men also won the best international entrepreneur category at the awards, which is now in its 21st year.

Mr Coppinger said he was truly surprised to see Teamwork chosen as overall winners of the awards, particularly as the company isn’t as well known as other technology firms.

“We ultimately want to be a billion dollar company and for us to achieve that we need people and winning an award like this help put us on the map,” said Mr Coppinger.

“A couple of years ago we were laser-focused on building the business outside of Ireland because that is where all our customers are . We realised though hat we had to do something about that because when it came to looking for staff we found it difficult because people didn’t know who we were,” he added.

“When you’re an entrepreneur there are dark days and good days. Today is a good day, added Mr Mackey.

Anne Heraty, chairwoman of this year’s judging panel, which also included the likes of Jerry Kennelly, Michael Carey, Pat McDonagh and Denis O’Brien, described Teamwork as a company that could be a world leader.

“Peter and Dan’s ingenuity and innovation really impressed the judging panel. Their ambition has shone through in what they have created at Teamwork. The company has huge global potential,” she said.

Teamwork’s founders will now go on to represent Ireland at the World Entrepreneur of the Year Awards in Monte Carlo next year, where they will compete with more than 60 leading entrepreneurs from around the world.

Bill Wolsey, founder and managing director of the Beannchor, a Belfast-based hospitality group that employs more than 750 people, was named EY Industry entrepreneur of the Year. Beannchor runs than 40 pubs, a chain of restaurants, and a number of four- and five-star hotels including Belfast’s Merchant Hotel,

Elaine Sullivan, co-founder and chief executive of early-stage life-sciences company Carrick Therapeutics, won top prize in the emerging category. The start-up is seeking to build Europe’s leading oncology company by collaborating with world-class cancer researchers to defeat many of the most aggressive and resistant cancers.

Irish-American tech veteran Sean O’Sullivan was also honoured with this year’s special award “in recognition of his embodiment of life-changing innovation and outstanding service to global entrepreneurship”.