Audeara A-01 headphones: Music to the ears of serious audiophiles 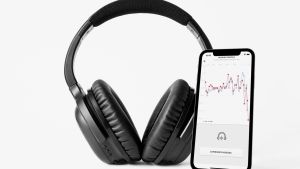 There is a first time for everything: this week it was the first time I had headphones that were – supposedly – tuned specifically for my hearing. In a fairly crowded headphone market, that is what Audeara is hoping will set its headphones apart: the ability to custom tune the sound for each user.

On first impressions it seems like a bit of a gimmick, but there is a noticeable difference between using the headphones out of the box and once they’ve been adjusted using the free app. So there is something to be said for tinkering with the audio.

First things first. The A-01 headphones are over-ear Bluetooth headphones with active noise cancelling, two bonuses if you are a frequent traveller who relies on your phone for everything from movies and music to podcasts. An increasing number of new phones are being released minus the headphone jack, which means a choice between wired headphones with a USB C or Lightning port, or investing in Bluetooth headphones. There was a time when Bluetooth meant poorer audio, but the current crop of wireless headphones can hold their own. And active noise cancelling is a sanity saver if you are travelling regularly. You simply flick the switch and the background noise melts away.

If you use the Audeara out of the box without tuning the audio for your own hearing, you won’t be overly impressed. Sound is on the flat side, just bordering on acceptable. It’s only after you spend a bit of time with it that you start to hear the benefit.

To do that, you need to download the free app. Once you’ve connected the headphones to your smartphone, you get the option to do a short test, the standard test or a more involved one. The short test is only a few minutes, the more involved one is 15 minutes, and it involves identifying when you can just about hear the beeps. Each ear is done separately, and it was interesting to see the graphs for both ears and how they differed. That means you have to wear the headphones on the correct ears, though; to help you with that, there’s a large L and R on the inside of each cup.

It goes without saying you’ll get the best results out of the the highly detailed test. The only issue is that it gets very dull very quickly. You need to be committed to getting your personalised audio profile, or else you’ll lose the will to live about halfway through the first ear.

Once it is done, though, there is a noticeable difference in the audio. Flat audio becomes rich and detailed. There is tone and depth. It’s like a completely new pair of headphones. So it is worth persevering to get that improved audio. There’s also the possibility of protecting your hearing in the future, which I can’t attest to just yet, but if it makes a difference, I’ll take it.

For others, the noise cancelling will be the key feature. But not all noise cancelling headphone are created equally. My long-time favourites are Sony MDR 1000X. They block out most background noise, are comfortable to wear for long periods of time and have touch sensitive controls on the ear cup. You can even allow ambient noise filter through by putting your hand over one ear.

How do the Audeara A-01’s stand up? They’re comfortable, but not quite as comfortable as my usual pair, and are more of a snug fit – not a problem here, but could cause issues for people with larger heads. They are well made, though, and feel sturdy. Audeara has skipped any kind of music controls on the headphones, so if you are listening over Bluetooth, you’ll still need another way to control your music and volume. It’s not a deal breaker, though.

Personalised audio profiles sound like a really great idea, and the difference between the out-of-the-box sound and the tweaked audio is marked. Plus these headphones are very well made; they don’t feel flimsy and could stand up to a bit of rough treatment.

It’s worth investing the time it takes to customise the audio, but it’s tedious to do, particularly if you go for the most detailed and in-depth version.

The audio is tuned for you and you alone, which means anyone else using the headphones won’t have quite the same result if they borrow them. On the plus side, that means they will probably leave your headphones alone.

If you are particular about your audio, these headphones may give you a new perspective on your music. For others, it may be overkill though.