National Broadband Plan woes could be a blessing in disguise 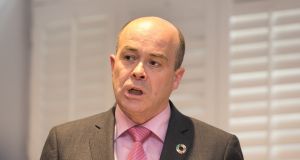 It’s perhaps just a coincidence that a major telecoms sale should come unstuck for a second time under Fine Gael and for broadly comparable reasons – essentially the relevant minister’s relationship with one of the bidders.

From the start, the Department of Communications took an incredibly legalistic approach to its broadband tender, tying bidders up in mountains of paperwork.

The nervy approach was justified on the grounds that the Government was desperate to avoid a “Moriarty II” scenario, which is what makes former minister Denis Naughten’s ill-advised contacts with lead bidder David McCourt so difficult to comprehend.

It’s premature to suggest the controversy has wrecked the process. Perhaps it can be rescued, but it’s hard to see how the tender with Granahan McCourt as the sole bidder can survive. Independent auditor Peter Smyth is currently assessing whether it has been compromised.

Fianna Fáil communications spokesman Timmy Dooley believes McCourt’s interaction with the minister has compromised the process under the “canvassing will disqualify” principle.

Rather than being a disaster in the making, however, the hiatus could be just what the Government needs to reboot what was beginning to look like a failing plan anyway.

With so much of the traditional industry jumping ship, it’s obvious that the idea of a competitive tender with a State subsidy for the winner hasn’t worked. The financials don’t work for either side and the minutes of various meetings between McCourt and department officials bear this out.

When first mooted in 2012 the then communications minister Pat Rabbitte described the plan as electrification for the 21st century, and maybe he unintentionally gave us the blueprint of how it will be achieved – essentially directly by the State, not in partnership with the private sector.