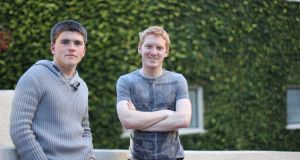 John and Patrick Collison, co-founders of Stripe. The company is valued at $9.2 billion

Index, which was founded in 2012, is a San Francisco-headquartered retail software company that builds card-present software for popular in-store terminals and point-of-sale (POS) systems.

The start-up was established by Jonathan Wall and Marc Freed-Finnegan, who both formerly played key roles in building Google Wallet.

The company, whose technology is to be integrated with Stripe’s, has previously raised $26 million in funding, including $7 million in a Series A round led by Innovation Endeavors, a venture capital firm co-founded by Mr Schmidt.

No financial details of the deal have been disclosed. The acquisition is Stripe’s fourth. Last April it acquired Indie Hackers, a knowledge-sharing community for entrepreneurs. Other buys include Tonic in September 2016, and Kickoff in March 2013.

The deal is significant as this is the first time it gives the company a formal product for offline stores. While it has long supported in-person payments, the firm has increasingly been working with larger retailers, many of whom are looking for a more seamless “Stripe-like” experience when it comes to card-present transactions.

This has led the company to invest in its infrastructure to a allow new applications and businesses to be built on its core technology.

Stripe, which last month announced plans to open an engineering hub in Dublin, offers payment-processing services for online and mobile transactions. It supports credit-card payments in more than 130 different currencies, bank transfers, Alipay and WeChat Pay. It previously also accepted bitcoin but recently said it is to end support for the cryptocurrency.

The company, which employs more than 1,000 people globally, including more than 100 in Dublin, handles billions of dollars in transactions each year.

The company’s founders, who are both still aged under 30, joined the billionaires’ club last year, according to an Oxfam report. Stripe itself is valued at $9.2 billion following a number of investment rounds.