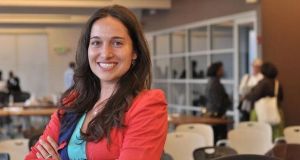 Alaina Percival of Women Who Code: “As we shake out the bad behaviour in the industry there will be opportunities for other people to rise up”

We may hear plenty about so-called “tech bros” and their appalling behaviour, but in spite of this the technology sector is slowly becoming a more welcoming place for women, a leading activist has said.

Alaina Percival, chief executive of Women Who Code, an organisation that currently has 137,000 members worldwide, added that it makes sound economic sense for employers to back increased participation in the tech sector.

Her comments come as TechIreland, the database established by former Dublin commissioner for start-ups, Niamh Bushnell announced a new campaign to increase the amount of funding for female founders this year.

Speaking to The Irish Times ahead of a visit to Ireland to take part in the “Diversity in Tech” week at Dogpatch Labs in Dublin, Ms Percival said while the stories about tech bros made grim reading, they would ultimately lead to a better environment for all.

“As we shake out the bad behaviour in the industry there will be opportunities for other people to rise up because the blockers will be gone and more positions will open up. This will have a much bigger impact than the one or two headlines that come about with big cases,” she said.

Women Who Code, which was established by in 2011, has chapters in more than 60 cities around the world, including in Dublin. The organisation runs events and workshops, and donates millions of dollars in scholarships and conference tickets to members.

Ms Percival said the non-profit is intent on encouraging more women to consider tech as a career.

“There are a lot of very successful and talented women in the tech industry. We want to have them be more visible and for them to inspire a new generation who are in more junior positions, or who are considering this career path. The sector is a fantastic place for all genders and given that it has a lot of benefits such as great pay and flexibility it is a good place for women to be.

“Given that there is a market deficit of engineers, there are huge opportunities for employers to move women into higher positions,” she added.

Dogpatch is running a number of diversity-related events this week, including an invite-only “Allyship in Tech” event on Thursday evening.

Separately, TechIreland has announced its new campaign, which seeks to boost funding for female founders from €79.4 million last year to €100 million in 2018.

Ms Bushnell said TechIreland wanted to encourage more funding for female founders through better tracking of start-ups, by helping more women to put themselves forward to start companies and by convincing venture capital firms to seek firms led by women.

She said that a large number of Irish VC funds had already offered their backing for the initiative.

Commenting on the €100 million campaign, Trish Scanlon, chief executive of Soapbox Labs said: “Supporting and investing in female founders isn’t charity. It is an investment opportunity that is constantly overlooked. A diverse founding team that understands all markets and consumers is critical to prevent groupthink which limits a business’s potential.”

1 Over 400 complaints from migrant workers at meat plants lodged with WRC
2 Avoca warns of redundancies due to coronavirus
3 Staff at Dublin and Cork airports to vote on work practice changes
4 Moving in and out of lockdown is a recipe for economic disaster
5 NordicTrack S22i Studio Cycle: An expensive way to cut down on the cabin fever
Real news has value SUBSCRIBE