Irish start-up GirlCrew raises $1m in funding for US expansion 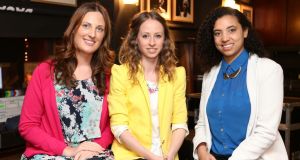 GirlCrew founders Pamela Newenham, Elva Carri and Áine Mulloy: the start-up plans to expand across the US

Irish start-up GirlCrew has raised almost $1 million (€810,000) in a seed funding round as the company plans expansion across the United States.

The women-only social network, which was founded by Elva Carri, former Irish Times journalist Pamela Newenham and Áine Mulloy in 2014, is planning to use the funding to expand in the US, city by city. Thousands of women signed up to waiting lists to get access to the app, which is available for iOS and Android, and can be accessed on desktop at girlcrew.com.

The funding will allow GirlCrew to expand across the US, its founders said. The digital community aims to help foster real-world friendships, with users signing up for book clubs, coffee meetings, or even seeking out other people with whom to go on holiday, as well as providing its community with busy online groups.

“We believe real friendships happen in person. However, sometimes you need a nudge and an extra channel in order to meet these new like-minded people,” said Ms Newenham, joint chief executive of GirlCrew.

“So many people have either moved to a new city, or have found themselves at a different life stage to their friends, because their friends are getting married, settling down etc. As a result, they need new friends, but making friends as an adult can be hard.”

The original idea for GirlCrew came when co-founder Ms Carri wanted to go dancing one Friday night, but none of her friends were available. She signed up for Tinder, replaced her profile picture with one that explained she was a girl looking for other female friends, and quickly gathered about 100 women.

The “Tinder Crew” later became GirlCrew on Facebook, before it launched its own app last year. The community has now signed up more than 100,000 members in cities worldwide, including Dublin, London, New York, San Francisco, Toronto, Edinburgh and Melbourne.

It has since added GirlCrew Premium, a subscription membership that guarantees access to four events each month organised by the company, rather than the spontaneous events organised by community members. It has also organised a series of GirlCrew Pro events in partnership with Microsoft, which have included speakers such as Google Ireland head Fionnuala Meehan, Irish Times columnist and activist Una Mullally, entrepreneur and chef Domini Kemp and beauty editor for beaut.ie Aisling Powell.

GirlCrew launched its app in Ireland last year, expanding it to cities in Britain and Australia. The app also facilitates topic groups for GirlCrew members, such as travel, careers, entrepreneurs, fashion and beauty, fitness and wellness, bloggers, dating advice and staying in.

The US is a key market for the company, Ms Newenham said, and the launch of the app will kick off an accelerated growth period for GirlCrew. “It’s a big step for us, but we’ve had global ambitions from the start,” she said.

To mark the launch of the app for US members, GirlCrew is hosting a women in tech event at SXSW Interactive in Austin, Texas, on March 12th where it is attending with support from Enterprise Ireland.