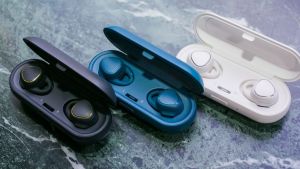 Samsung Gear IconX: play music and act as an activity tracker and as a coach for your runs.

Part of the reason I like over-ear headphones is that my ears are usually too small for regular earphones. It requires a bit of fiddling with the silicon ear buds and careful placement to make sure they fit properly and don’t fall out.

And with the Samsung Gear IconX earbuds, one dislodging itself and falling out might be an expensive exercise. Like Apple’s Air Pods, the bluetooth enabled IconX are two separate earbuds, and the potential for loss is high.

Like the Airpods, they come in a charging case that charges with USB C, giving you a charge every time you store them, and will last a couple of days. The box is a little bulkier than the AirPods, which is what they will undoubtedly be compared to, let’s be honest. But it does the job, storing them securely while giving them some juice. You also need that box to pair the earbuds with your device, or do something as simple as shut them off. There is no auto shut off once they’ve been removed from your ears, which is a shame.

The key thing is remembering to put them in the charging box, and not sticking them in your pocket, because that’s how you almost wash one in the pocket of your trousers. Not that it happened to me. Honestly.

Touch-sensitive panels on the buds will give you control over the music you choose to store on them. Those panels are quite small, so if you have larger hands, expect things to get fiddly. You’ll have to learn a series of swipes and taps to control your music, reject calls or control volume, and it takes a while to get it all down.

Soundwise, they do okay, although audiophiles might notice that the music doesn’t sound as good as wired options from time to time.

But while the IconX earbuds are great for listening to your favourite playlists while exercising, they aren’t just about playing music. They also act as an activity tracker, and a coach for your runs. The earbuds will automatically detect walking and jogging, logging your time and distance. A long press on the earbud will kick it into Running Coach mode; just be warned though that this will drain the battery of one of your earbuds faster. Yes, just one.

Of course all these extra features would be useless if they didn’t do the main thing: stay in my ears while I move.

To put them to the test, I put them in as securely as possible, swapping both the buds and the wing tips and then went for a run. A careful one. They stayed put throughout a 30-minute run – give or take a few minutes – although my pace these days isn’t going to put any serious runner to shame. Or even a casual one.

So next test was circuit training, And it was during a few jumping jacks that things started to work loose. One earbud – the left one – worked loose, slowly, before popping out. On a positive note, it’s unlikely other people would have the same issue, unless they also have similar awkwardly sized ears. They just never felt 100 per cent secure on me, although that may be something that disappears over time.

These are made to work with Samsung’s phone, so although they support iOS, you don’t get the full feature set. But it’s nice to have the choice.

These are comfortable to wear, although I still found they worked loose during strenuous exercise. Although they are slightly bulkier than I’d like, they’re still pretty small, and being able to store music on the earbuds rather than on your phone meant I could ditch the device.

Battery life isn’t outstanding – up to five hours officially for streaming and seven for MP3 music, but I didn’t get quite that long. Also, the coaching will drain the battery faster.

The charging case is small but still bulky, so it’s not as easy to stick in your pocket.

The automatic fitness tracking is great, although if you are looking for more accuracy, you’ll still need to carry your phone. That’s because they don’t have built-in GPS, so your stats may not be as accurate.

As a fitness coach crossed with wireless buds, the Gear IconX do pretty well. A few refinements would be welcome though.