Staff share in €54m payout after US takeover of Decawave 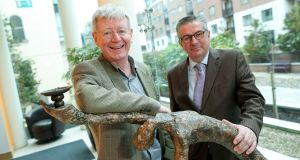 Staff at Irish computer chipmaker Decawave are expected to share a $60 million (€54.4 million) payout following the sale of the company to US-based Apple supplier Qorvo earlier this week for $400 million (€361 million).

Company founders Ciaran Connell and Michael McLaughlin and their employees shared a stake of about 15 per cent in the business through an employee stock ownership plan.

A large group of angel investors, who put money into the business at an early stage, are also among the winners. The 246 individuals held a stake of up to 56 per cent in the business through nominee accounts.

Founded in 2007 by Mr Connell and Mr McLaughlin, the Dublin-headquartered company offers ultra-wideband (UWB) wireless technology via a low-power chip that can identify the specific location of any object indoors to within a few centimetres.

Commonly described as being “Bluetooth on steroids”, the technology allows individuals to do everything from find their phones to unlocking their cars. While other technologies can also do much of this, it can’t do it as quickly or as accurately.

The data communication capability of the chip makes it a good fit for internet of things applications and other low-power wireless network applications.

Others to benefit from the sale include a number of venture capital businesses that came on board in a number of fundraisings.

This includes Atlantic Bridge, which led a $30 million (€27 million) funding round for Decawave in 2018. It held a 10.6 per cent stake. State-backed China Ireland Growth Technology Fund had a 9.3 per cent shareholding, while Act Venture Capital and Enterprise Ireland also had significant stakes in the Dublin-based company.

Among the angel investors in Decawave were Jonathan Coon, a Texan-based entrepreneur who founded 1-800 Contacts, a contact lens distributor later acquired by US health benefits company Wellpoint in 2012 in a $900 million (€812 million) deal. Mr Coon, who is now chief executive of Impossible Ventures, invested over €10 million in Decawave in 2013.

Speaking to The Irish Times, Mr Connell described the acquisition as a win-win for everyone involved.

“Every single investor in Decawave has made money on this deal,” he said, adding that the transaction had been “in the works” for about six months. “We’re extremely excited that it has been done.”

Mr Connell admitted that the recent move by Apple to start using ultra-wideband technology in the iPhone, had sparked interest in Decawave, which is considered a leader in the area.

“It has become a big boys’ game now. Once the technology went on the iPhone 11, there was serious traction in the market.”

The investment required to capitalise on that opportunity meant the time was right for the company to be taken over by a larger corporation.

While the use of UWB in mobiles has raised the profile for the technology and the company, Mr Connell noted that Decawave has shipped more than eight million chipsets for use in everything from phones to drones.

“Coming into the Qorvo fold means our technology is going to be adopted everywhere, which means Decawave will continue to grow and to hire.” He declined to say how many more jobs are likely to be created but said he expected a “significant” number of new roles in the future.

John Flynn, managing director at Act Venture Capital, described the exit as a fantastic deal for all of Decawave’s founders, employees and backers.

“They were clearly ahead of their time and were instrumental in directing the standard for UWB.” He praised the founders for their ability to bring in revenues and find backers even when institutional investors weren’t ready to invest in the company.

“They did a really good job of staying relevant and selling their story to private backers during the period before they could get institutional investors to back them.

“The sale is without doubt a great deal for everyone involved,” he added.