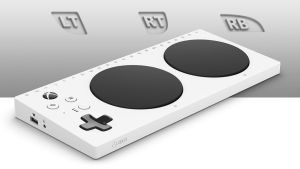 It can be used wirelessly with Xbox, or over USB with Windows

Where to buy: xbox.com

When Microsoft unveiled the Xbox Adaptive Controller, it had one main goal in mind: to make gaming more accessible. Suitable for use with both the Xbox – wirelessly – and over USB with Windows systems, the controller is designed for those with additional needs.

The basic layout is two large buttons that cover the A and B functions of the standard controller, a direction pad, the Xbox button and menu controls. To use it for gaming, you’ll need to add joysticks. That flexibility allows you to build your own custom controller, adding external joysticks, buttons and switches to the controller to improve your gaming experience.

But that may also be an issue for some. At €90, the Xbox Adaptive Controller isn’t cheap. Adding in extra joysticks and other add-ons will increase the cost even further, and that may put this out of the range of some gamers. A standard Xbox controller, for comparison, is €65, so you are already paying extra for the accessible version.

Overall, the Adaptive Controller is a great idea that should open up gaming. The cost, however, may be another barrier.