Removal of 300,000 homes from map was due to state aid rules, says Denis Naughten 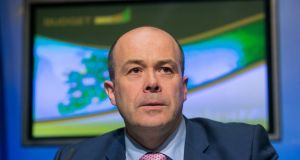 The sole remaining bidder in the Government’s National Broadband Plan (NBP) is “really committed” to the project and “there is no sense of stopping the clock now”, Minister for Communications Denis Naughten has told an Oireachtas communications committee.

The Minister also denied that last year’s decision to alter the map of homes and businesses that would fall under the State-subsidised rural broadband scheme was a political one.

The NBP procurement team is “still in dialogue” with the bidder, a consortium led by ENet and energy group SSE, and is confident that the process can bring high-speed broadband to the 542,000 most isolated homes and businesses, Mr Naughten said.

“We are all agreed on the policy and the initiative,” he said. The Minister was speaking as it emerged that the Government will seek to ignore a Dáil vote requesting a review of the NBP.

Oireachtas committee members expressed concern about what might happen if the remaining bidder decided to withdraw. Mr Naughten said the ENet-SSE consortium considered Ireland a “test bed” for similar broadband projects across the world and were committed to it.

The controversial move in April 2017 to remove 300,000 homes from the NBP, after Eir said it would roll out broadband to them on a commercial basis, has been blamed for the withdrawal of the two other bidders, the ESB-Vodafone venture Siro and Eir itself.

The Minister said state aid rules specified that the State could only intervene in areas where commercial businesses would not go.

However, former minister for communications Eamon Ryan suggested it was “a political decision” that had “undermined the scheme”.

“I can tell you categorically that there was no political decision taken in relation to this,” Mr Naughten said. He had been “hesitant” about altering the map, especially in light of his knowledge of rural broadband problems in his Roscommon-Galway constituency, he added.

“I made it crystal clear to Eir that I was not prepared to alter the map on a promise,” the Minister said. Telecoms companies had in the past embarrassed politicians by “doing fibre to the press release”, in which they trumpeted the rollout of high-speed broadband without specifying a date, he noted.

The Minister said he could not comment on the reasons for Eir’s “regrettable” withdrawal from the NBP. “The decision of Eir to pull out, whether it is related to the 300,000 or not, is a matter for Eir.”

He described the NBP as “a very robust process with strong risk management throughout”.

Several committee members also suggested that with only a single bidder left, the Government’s negotiating hand will be weak when it comes to agreeing a price with ENet-SSE.

However, attempts to discuss pricing matters met a stumbling block after Mr Naughten said these were questions for the Department of Communications officials on the NBP project team. Although they were present at the hearing, under the guidance given to committee chairwoman Hildegarde Naughton, the officials could not speak in public session while the Minister was there.

Rather than hear from the officials in private session, the committee agreed to invite them back to a separate public session next Thursday, at which Mr Naughten will not be present.

Mr Dooley said the Minister had provided “a lot of information, not a lot of answers” on the NBP. “If there is a fatal flaw in this process that is going to lead to its collapse, it is better to know now.”

1 Fiona Reddan: Who’s afraid of Revolut? Not AIB and BOI it seems
2 Lahinch Golf Club runs out of its own cash after €3m Covid-19 hit
3 Son putting elderly dad under pressure to sign over land
4 How to gift your child a house deposit . . . tax free
5 Irish designer of Oxford vaccine: ‘I’ve never worked so hard in my life’
Real news has value SUBSCRIBE