Broadcom raises bid for Qualcomm to about $121bn 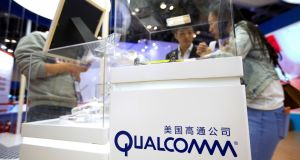 Broadcom’s offer of $82 per Qualcomm share would take the form of $60 in cash and the remainder in Broadcom shares, according to a statement on Monday. Photograph: AP

Broadcom has raised its bid for Qualcomm to about $121 billion, in an attempt to force what could be the largest-ever technology deal.

The new offer of $82 a Qualcomm share will be Broadcom’s “best and final,” according to a statement on Monday. The deal would take the form of $60 in cash and the remainder in Broadcom shares.

Qualcomm’s board previously rejected Broadcom’s original $105 billion acquisition approach, and has since dug in against the threat of a takeover, with chief executive Steve Mollenkopf dismissing the bid as not being worth consideration. Qualcomm has also argued that regulators would be unlikely to quickly, if ever, approve such a combination.

Broadcom chief executive Hock Tan is now putting pressure back on Mollenkopf and his board, who have so far refused to negotiate. By sweetening the offer, he’s also improving prospects for his nominations to Qualcomm’s board in a shareholder vote next month. A victory in that effort would void the current opposition.

Current Qualcomm board member Paul Jacobs, alongside one other, have been invited to join the new board, Broadcom said.

The offer also hinges on Qualcomm’s ongoing $47 billion purchase of NXP Semiconductors. NXP shareholders have piled into the stock, arguing Qualcomm’s $110-a-share offer must be improved. But Broadcom said the deal must either be concluded at the current offer or terminated. Qualcomm shares fell 1.5 per cent to $65.09 in early trading on Monday. New York. Broadcom and NXP were little changed.

Qualcomm confirmed receipt of the revised proposal and said it would review the offer before responding.

Broadcom’s offer will include a pay out to Qualcomm in the event that it can’t get the transaction approved by regulators, and a provision under which it pays more cash if the process drags beyond the year it thinks it will take. That’s an attempt to diffuse one of the key objections that Qualcomm has offered in not accepting the approach.

Broadcom didn’t specify the exact amounts of the two forms of compensation but called them “significant.” – Bloomberg