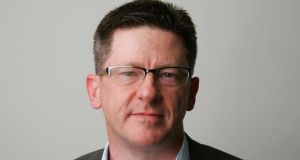 Brian Caulfield of Draper Esprit in Ireland warned that “if you are a company looking to raise private equity money, then you’d better have a China strategy in place”.

If there is one noticeable trend in tech funding of late, it is how much interest private equity firms are taking in software companies, particularly in Europe.

European software M&A activity set a new record for the number of transactions last year with one of the main drivers of this growth being private equity, which approached 50 per cent of overall disclosed deal value for the first time in the region.

Overall, Mergermarket tracked $11.2 billion of private equity deals in the $24.7 billion overall total for 2017. That is some figure and many Irish software firms, including the likes of CarTrawler, AMCS, CoreHR, Fenergo and Trintech, have all benefited in recent years from raising private equity money.

At an event held in Dublin last week by Duff & Phelps’ technology M&A division, Pagemill Partners, a number of Irish tech veterans stressed that the traditional view of PE guys as asset strippers was no longer one that fitted.

“Some of those guys are still out there but they are few and far between nowadays,” said Paul Byrne, former chief financial officer of Trintech and now chief executive at fast-growing fintech company CurrencyFair.

“The other thing we’ve noticed is the increasing sophistication of PE buyers. They really have a much deeper understanding of the overall business model now and don’t just spend their time looking at spreadsheets. This is a big change,” he said.

Tech veteran turned venture capital guy Brian Caulfield warned that “if you are a company looking to raise private equity money, then you’d better have a China strategy in place”.

He said that one trend he had witnessed increasingly of late was a lot of Chinese buyers for European companies across multiple exit processes.

“Another trend is that buyers in certain markets are very focused on whether a target has a Chinese presence or strategy because it has become so important a market for some businesses that if you cannot articulate what your strategy is, then that makes you much less attractive as an acquisition target,” Mr Caulfield, an Irish Times board member, added.

In a move that will possibly reassure entrepreneurs, Mr Caulfield also revealed that VC firms such as Draper Esprit aren’t always as hard on investee companies as fully-fledged PE companies are.

“A PE mindset expects consistent progress so if you get that mindset in a company that is still figuring stuff out, when the shit hits the fan they go apeshit and that’s where things get tricky,” he said.

“For us as venture investors it is a minor miracle if a company hits its numbers and we don’t start from the expectation that it will consistently do so. We expect the shit to hit the fan twice a year and so are prepared for it and engage on that basis,” Mr Caulfield added.

A number of speakers noted that strategic buyers in the software space have begun copying the tactics of PE ones.

“A lot of strategics have PE blood in them, so much so that a lot of them run their acquisitions for the earn out period as completely separate entities so essentially they are more like financial owners of the business,” said Bobby Healy, chief technology officer of CarTrawler.

“Strategic deals have gotten a good reputation in our sector in recent years and it is a further headache for PE because as strategics wise up to private equity tactics I think they’ll become stronger contenders,” he added.

Jim Mountjoy, who is seen by many as the granddaddy of the Irish tech sector, having founded Euristix and co-founded Baltimore Technologies, also stressed a key advantage that strategic buyers have over PE ones.

“Strategic investors are inclined to be more enthusiastic about the acquisitions they want to make. PE ones don’t have as good a reputation as strategics still. That could be out of date but it is still the case,” he said.