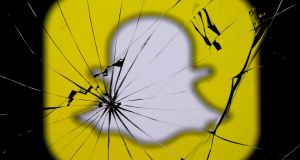 In the two months since Snap went public, one big question has hung over the social-media company: can it survive a full-on attack from Facebook, which is trying to steal is users and even its description of itself as a “camera company” by copying Snapchat features such as photo-diary “stories” and augmented-reality selfie masks?

When Evan Spiegel, Snap’s co-founder and chief executive, was asked by an analyst during his first earnings call as a public company whether he was “scared” of Facebook, his initial response was to laugh.

“If there’s one thing I want to communicate today, it’s the overall importance of creativity to our business,” Mr Spiegel replied. “The bottom line is, like, if you want to be a creative company, you’ve got to get comfortable with and basically enjoy the fact that people are going to copy your products if you make great stuff.”

The trend is nothing new in the tech industry, the 26-year-old Stanford dropout explained. “Just because Yahoo has a search box, it doesn’t mean they are Google, ” he said, referring to Alphabet’s continued dominance in web search despite repeated attempts by its rivals to unseat it.

Shares in Snap fell by as much as 25 per cent in after-hours trading on Wednesday, slashing Mr Spiegel’s paper wealth by about $1 billion (€0.9 billion). At one point, the stock came within a few cent of the $17 price set by bankers at its IPO.

Even if Mr Spiegel is not worried about Facebook, the first-quarter report will leave many investors nervous about Snap, said Rich Greenfield, the BTIG Research analyst who asked him about that rivalry.

Mr Greenfield said investors would probably need to see a “few quarters in a row” of strong performance before Snap can win back their trust, especially as the disappointment came at a time when other internet companies reported strong results. “Even Twitter, with low expectations, outperformed,” he said.

Beyond simply laughing it off, Snap’s response to concerns about competition was to point to the continued increase in usage of its app. The number of “snaps” created every day in Snapchat has increased by 20 per cent since the third quarter of last year to three billion, and the amount of time people spend every day on the app has increased to more than 30 minutes.

However, some observers were unimpressed by a 5 per cent increase in daily active users compared with the previous quarter, taking Snap’s total to 166 million. Cathy Boyle, mobile analyst at research group eMarketer, had been predicting double-digit user growth this year. “Growth is settling into a single-digit range,” she said. “We did expect there would be a dip in adoption but we didn’t expect it this quickly. That suggests competition is having an impact.”

The growth looked relatively meagre when compared with Facebook’s main photo-sharing app, Instagram, which added 100 million monthly active users in the past four months to take its total to 700 million (Snap does not disclose a directly comparable monthly figure).

“I believe that Instagram is already substantially bigger than Snap in terms of the advertising revenue allocated to the platform,” said Brian Wieser, analyst at Pivotal Research. “They are trying to downplay the competitive threat from Facebook but . . . it’s real.”

While Snap is most often compared to other social-media companies, the high degree of secrecy with which Mr Spiegel guards his plans recalls, more than any other tech company, Apple. When asked about what investors might expect from Snap’s product development this year, Mr Spiegel replied: “I think at this point we are famous for not giving guidance on our product pipeline.” All he would say is that anything Snap can do to “reduce friction from the creative process” would help drive usage.

Drew Vollero, Snap’s chief financial officer, was similarly cautious, refusing to give any of the quarterly financial guidance that many public companies offer analysts to help calibrate market expectations. Snap, which is only six years old, would not make “short-sighted” decisions about profitability over improving the product, he said. “We are going to run the company here for the long term.”

Some analysts felt that Snap’s first outing lacked some of the big-picture vision that might have got Wall Street excited in spite of the numbers. Mr Spiegel’s unapologetic tone on the analyst call even surprised some who have worked closely with him.

Mr Wieser said the call seemed “casual”, as though from a company that was more accustomed to talking to investors on a regular basis. “He’s got a sales job to do but they weren’t really selling,” Mr Wieser says. “They were not trying to impress and maybe that’s okay, but the problem is they have a ridiculous valuation to either justify or demonstrate that they’ll grow into.”

Even after Wednesday’s declines, Snap is still valued at more than $20 billion. That reflects the confidence that over time, it can build a meaningful advertising business out of its young and desirable audience.

“There is one key to the future of this company: they have to out-innovate everybody,” said BTIG’s Mr Greenfield. “When it was described as a ‘sexting’ app, everyone thought it was a joke. Look where they are now.”

Yet without any guidance on either its financial results or its product plans, Mr Greenfield says investing in Snap for now comes down to a simple decision: “Either you are a believer in the opportunity and the vision, or you’re not.”

1 Apple’s iPad turns 10 with hints of a resurgent future
2 Comcast acquires Irish cloud-based telco Blueface
3 Pilita Clark: When a rude boss keeps you waiting, why not walk out?
4 Money matters: ‘My father embarrassed us with his haggling’
5 Little strategic thinking in election manifestos of Fine Gael and Fianna Fáil
Real news has value SUBSCRIBE