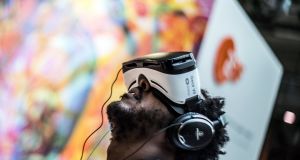 A visitor uses a 2DF headset at Re:publica in Berlin in May. Photograph: Filip Singer/EPA

Re:publica (re-publica.de), the big annual Berlin-based digital culture festival, is to return to Ireland in September with a two-day event after holding its first ever spin-off festival in Dublin last autumn.

“We started small last year, but we really liked Dublin, so we want to make it bigger and also connect with more cities,” said Andreas Gebhard, one of the cofounders.

Re:publica will be held in Dublin on September 7-8th this year. The festival organisers will also bring Re:publica to Thessaloniki in Greece later in 2017.

“We want to add one city a year so that we have a full overview of digital society across Europe, ” said Gebhard.

From a modest start 11 years ago, Re:publica has grown into a major three-day celebration and exploration of digital culture, with more than a dozen sessions running simultaneously from morning until well into the evening. Last year some 770 speakers from 60 countries participated.

About 9,000 people are expected to visit the festival this year. Talks, which are presented in German or English, explore all angles of digital culture, including politics, coding, media, the internet, society, health, the arts, business and fashion. In addition the event includes maker spaces and workshops, and a lab space where digital projects can be demonstrated.

Although there are a few business sponsors, and some business-oriented sessions, Re:publica focuses more on ideas and activities, as well as activism.

People are invited to present a talk or to suggest speakers. The speaker list includes researchers, activists, technologists, writers and artists, many of them internationally known in digital culture, media and political circles.

The audience is as eclectic as the speaker list, ranging from artists and coders to academics, digital activists and business people. About half of attendees and speakers are women, unusual for most technology-oriented events.

Gebhard said organisers decided to bring Re:publica to Dublin last year for the festival’s 10th anniversary because they were interested in “going abroad” with the concept. Their priority was an English-speaking country, because the festival already offered talks in both German and English. They chose Dublin because they liked the idea of a smaller city, and one that had a strong digital culture.

The Re:publica team will be in Dublin to formally announce the September event on June 8th, when they will hold a town hall-style meeting with people interested in shaping the content and structure of the festival.

Last year’s Dublin event coalesced around themes including digital politics and surveillance, but this year’s festival could go in whatever direction emerges from the June meeting, she said.