Web Summit lost out when it lost its Irish soul

What makes an event like Re:publica special is its ‘anything goes’ Berlin funkiness 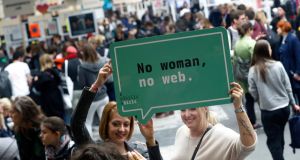 Held in a disused 19th-century freight station turned event venue, Re:publica has been fascinating and fun, with a consistently high quality of speakers and an excellent live English and German translation team for talks given on the main stages.

From an Irish perspective, an obvious and intriguing point of comparison is the Web Summit, the huge technology conference formerly of this parish but now – as just about anyone in Ireland knows all too well – departed to Lisbon amidst various ructions.

Both events were founded by youthful innovators without any significant event production experience, wanting to create something different from the norm but without a detailed road plan.

Both also are – or in the case of Web Summit, were – grounded very much in their place of origin.

What attracted so many to Web Summit initially, was, yes, the very high calibre of speakers, but really for outsiders, how embedded it was in the city of Dublin and how freewheeling and serendipitously Irish it was in spirit.

What makes Re:publica special, separate from the content, is its artsy, multicultural, “anything goes” Berlin funkiness, low key but confident.

And the very low-key presence of its business sponsors. Google, IBM and Microsoft all had stands, but they were small and intimate, of the same pallet and rough board construction as the small digital rights campaigners and startup organisations.

Microsoft’s signage was chalk on a chalkboard and its stand was there to highlight its LGBT networks and support.

Google had made a logo sign of plastic flowers and was there to tell attendees about grants for a media programme, not to be, well, Google.

IBM defined its space with a little robot and ran workshops each day.

Surprised at the lack of big corporate banners and self-promotion, I asked Re:publica co-founder Andreas Gebhard if there were set rules on stands. No, he said.

“They just want to be integrated too. It’s not about the biggest stand, but what they have to offer.”

No speakers that I heard pushed a company or a product. This has to be one of the very few tech-centred events that hasn’t followed the Silicon Valley event recipe – now everywhere – of slick stands, high corporate visibility and “positioning” of sponsorship speakers.

Web Summit, of course, went down that slick route fairly quickly, having turned into something unexpectedly massive.

So large, it was ultimately beyond the scope of what Dublin could effectively host. Re:publica has opted for a main Berlin event with smaller satellite events, including in Dublin again this September 7-8th.

I’ve always thought a better route for Web Summit would have been more the Re:publica model – a smaller Dublin main event as the unique brand calling card from which to jump off and hold worldwide events. Organisers in the end decided to both move Web Summit and diversify to other events.

Nothing wrong with that. But something was definitely lost. As a seasoned large and small conference attendee, I know that something – many things – evaporate when events get massive.

The other notable difference between Re:publica and Web Summit is the speaker list and audience.

Don’t get me wrong, Web Summit has amazing speakers, but (as has been highlighted annually), a microscopic number of women (and they cheat too, by counting female talk moderators, like me, as “speakers”).

By contrast, Re:publica’s speaker list and audience is, refreshingly, about equally gender split. What you notice is two things: 1) that you don’t keep thinking “jeez, there’s an awful lot of guys”, and 2) there are queues for the women’s toilets.

The audience is also noticeably diverse in nationality and race and the event works hard to make sure people with disabilities attend and participate. Main stage talks are all deaf-signed and/or captioned, and the site is physically accessible, and numerous attendees are in wheelchairs or on support scooters.

All of this is not to argue that one event is “better” than the other. They are just very different now, with different aims and values, though they had many similarities at their founding.Where they are now is in large part due to decisions made by their founders.

Yet standing in the midst of the good natured, energetic madness of Berlin’s Re:publica, I couldn’t help but feel that Web Summit lost much that had made it special, rather than just especially huge.

Perhaps most particularly, the very thing that had always made it special: its Irish soul.