Some analysts predicting that net loss could be as much as $1.5bn 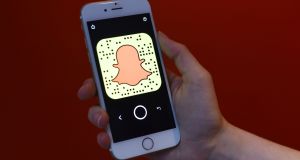 Snapchat has recently been challenged by Facebook and its family of apps, including Instagram, Messenger and Whatsapp

Snapchat’s parent company, Snap, is expected to report a big loss when it reveals its first financial results on Wednesday.

The camera company behind the Snapchat photo-messaging app listed on the US stock market for the first time in March and the company’s value initially rose beyond $25 billion when it began trading.

However, shares in the company have since dropped in value, partly due to pressure from rivals, including Facebook and Instagram, and some analysts are now predicting the company could report a net loss of up to $1.5 billion.

Snapchat has recently been challenged by Facebook and its family of apps – including Instagram, Messenger and WhatsApp – all of which have introduced features similar to those that have made Snapchat popular.

Investor confidence has also been hit by the news that Instagram Stories – the photo-sharing app’s own version of Snapchat’s Story feature – has surpassed it in terms of daily active users.

On Tuesday, Snapchat announced it was updating another signature feature – time-sensitive photo and video messages – to allow users to view them for as long as they wished, in a move seen by many as the first attempt to fight back against its rivals.