Ireland could be hub for artificial intelligence, conference told

FutureScope event covers everything from AI and fake news, to IoT and data analytics 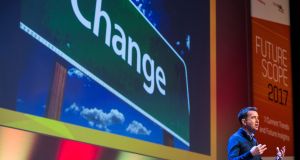 Journalist and entrepreneur Mark Little at FutureScope, a conference that promotes collaboration between entrepreneurs and multinationals. Photograph: Keith Arkins

Ireland could be a global centre for artificial intelligence, while Dublin is on its way to being a smart city, attendees to the FutureScope conference in Dublin were told on Thursday.

Other topics under discussion at the event included the internet of things, the rise of fake news, the future of work, and design thinking.

Prof Barry O’Sullivan, director of the Insight Centre for Data Analytics in Cork, and the man named Science Foundation Ireland’s researcher of the Year in November, said Ireland had the potential to lead the world in AI.

Speaking ahead of a keynote speech on the topic of humans versus machines at the event, Prof O’Sullivan told The Irish Times that moves by IDA Ireland to promote the country as a destination for AI companies were to be applauded.

“All of the major names involved in AI already have a presence here, although most are not doing research locally. Given that, and Ireland’s academic credentials, and the accompanying increase in collaboration between industry and academia, there is massive potential for the country in this area,” he said.

Prof O’Sullivan added that there have been huge leaps made in terms of automation in recent years but that many of us tend to view AI as something negative.

“Take autonomous cars. The technical problems are largely solved and the primary barrier to widespread adoption is the people problem. Autonomous cars are already safer that human-driven ones but most of us aren’t ready to allow them on the road yet,” he said.

He added that discussions around job losses arising from automation were likely to increase in the future as AI becomes more of a reality in the workplace.

“Gaming got the initial traction with a lot of consumer products out there but now that’s changed. In the last few years, people have realised that there are business problems that can be solved using AR with substantial gains in productivity and reduced error rates,” said Mr Sweeney.

Meanwhile, on a panel discussing fake news, Storyful founder and former Twitter Dublin head Mark Little said the phenomenon had been with us for some time. However, he said the speed and scale at which misinformation is spread now was unheard of until recently.

He added that news organisations were in part to blame for the rise in fake news.

“News organisations are still in survival mode and there is little or no innovation in established journalism and so it is not proving to be as useful as it should be,” Mr Little said.

“In some ways journalism is in a really healthy position with people consuming huge amounts of news, but a new business model is needed,” he said.

FutureScope was expecting to attract 1,200 attendees, 300 of them entrepreneurs looking to strike deals with multinationals and investors.

The event organiser, Dublin Business Innovation Centre, said the conference had growth substantially over the four years it has been running.

“FutureScope was designed to have a lasting engagement for Irish companies to collaborate with multinationals. We started with about 400 people. Last year, we had 800 and now it has grown again. But the emphasis is still on keeping things local in terms of adding value rather than just drawing in big names for the sake of it,” said Michael Culligan, the organisation’s chief executive.