Samsung targets market for compacts as it unveils new Notes 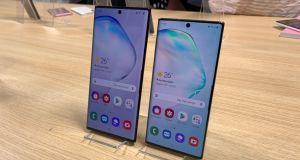 Samsung has unveiled its latest Note devices, offering two different-sized phones as it tries to tap into the market for smaller devices.

“We know there is a group of consumers who have been looking for all the power and performance you find in the Note in a more compact size,” Samsung said. “That’s why we have created the Galaxy Note 10 to meet the needs of this consumer.”

The Note has borrowed more than the inclusion of two sizes: the Infinity-O Display design from the S10 range, which sets the camera into the display rather than into a bezel, makes an appearance here, as does the ultrasonic fingerprint sensor that is located under the screen.

Besides the size and storage, there are other differences between the phones. the Note 10+ gets the more powerful camera set-up, with a quad camera on the rear compared with the note 10’s triple camera. Both phones get the Ultra Wide 16-megapixel lens, with a wide-angle 12MP camera and a 12MP telephoto option. The Note 10+ gets an additional depth-vision camera.

The camera has been a particular area of focus for Samsung, which is aiming for a mini studio in your pocket with the Note 10 series.

The live focus previously seen in the still camera has now been included for video, allowing phone users to blur the background or fade out colour. The sound has also been improved with the Note 10 series, with the ability to zoom in on the subject, cutting down on background noise.

The Note 10+ gets the bigger battery at 4,300mAh, while the Note 10 gets 3,500mAh. Samsung has also built in the ability to charge the phone to full in 30 minutes with an optional 45-watt charger. Samsung said it was also using technology to make the battery more intelligent about power consumption.

“It’s going to optimise according to how you use your phone, learning your behaviours and which apps you use to ensure it maximises that battery life as long as possible,” Samsung said.

Both devices include the S Pen, which is bluetooth enabled. Samsung has added new functions for the pen, such as gestures that will allow you to control the camera, switching between the different camera functions and the front and rear camera without ever laying a finger on the phone.

The note-taking app on the phone includes the ability to convert handwriting into text to share via email or other messaging service.

Samsung has also included a screen recorder with picture-in-picture, so you can film yourself and your phone’s screen at the same time. The move may be targeting those who like to stream their gameplay, with Samsung also talking up the phone’s credentials as a gaming device.

1 Over 400 complaints from migrant workers at meat plants lodged with WRC
2 Coronavirus: We must save lives but we also need to live
3 Avoca warns of redundancies due to coronavirus
4 Virgin Media vows to withhold sports channels until Eir ‘pays its bill’
5 Companies without tax clearance shut out of Covid wage subsidy
Real news has value SUBSCRIBE