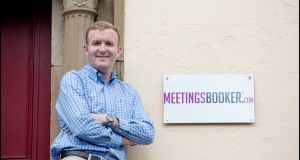 MeetingsBooker.com is expecting the number of reservations it processes through its software platform to triple next year to more than 30 million.

MeetingsBooker is further disrupting the $400 billion global meetings market by changing how hotels and venues sell their venues by automating the process on their websites.

In addition, the company three years ago began offering a white-label booking platform for large corporates that has proven to be a big winner.

MeetingsBooker has just rolled out such a platform for American Express Global Business Travel, a subsidiary of the financial services giant that has annual turnover of more than $30 billion.

One of the world’s largest oil companies as well as one of the top three global consultancy firms have also both acquired white-label versions of the MeetingsBooker system for in-house use.

MeetingsBooker was founded Ciaran Delaney in early 2009. He said that despite widespread changes in the travel tech market in recent years, finding and booking a meeting venue is the last part of business travel to be transferred online.

“I think in about three years some 75 per cent of this market will be online, compared with about 5 per cent currently, so there are huge growth opportunities for us.”

Prior to establishing the business, Mr Delaney worked for both Bord Fáilte and Tourism Ireland, and was also director of marketing at the 1,000-bedroom Citywest hotel in Dublin.

MeetingsBooker.com has raised more than $3 million to date; backers include Act Venture Capital and Delta Partners.

The company does not disclose revenue but Mr Delaney said he expected sales to double this year with the number of reservations made through the company’s platform to triple from 10 million to 30 million by the end of 2020.

The last set of publicly-available accounts for MeetingsBooker.com show accumulated losses rose to €2.8 million in 2017.

“Our original idea was simply to grow MeetingsBooker.com as a corporate marketplace and that is something that is continuing to scale, but unlocking the demand within major organisations is really the bigger opportunity,” said Mr Delaney.

1 How can I view my dead brother’s will if I’m not the executor?
2 Michel Barnier rejects UK’s call for Canada-style trade deal
3 Barry’s Hotel at €8m comes with potential to double in size
4 Applications for 961 new homes in Dublin and Meath rejected
5 Aqua Dome in Tralee could close over insurance claims, directors warn
Real news has value SUBSCRIBE