Initiafy becomes GoContractor as it raises €500,000 and looks to expand in the US 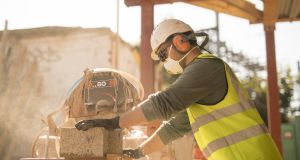 In the US, where GoContractor is increasingly focused, it counts 11 of the top general contractors as clients.

Initiafy, an Irish company that has developed an online induction platform for workers in the construction sector, has rebranded as GoContractor.

The move comes as the company recently secured around €500,000 in investment as it looks to grow market share in the United States, where it currently earns half of its revenue.

Founded by Seán Fennell and Julie Currid in 2012, GoContractor is a software-as-a-service (Saas) company that has created a platform for employee orientation that also ensures better compliance with safety regulations.

The company, whose Irish clients include Sisk, Roadbridge and the ESB, claims it can cut on-boarding costs by as much as 50 per cent by getting workers to do induction ahead of time via smartphones, tablets or laptops.

“We make everyone’s lives easier by gathering all the required information for contract workers before they arrive on site, along with sorting all the necessary certification and ID, so that they can get straight to work,” said John Naughton, who recently took over as chief executive of the company.

In the US, where GoContractor is increasingly focused, it counts 11 of the top general contractors as clients.

Over the past 12 months GoContractor has doubled the number of construction projects it works on. Its platform is currently being used to induct workers at what is believed to be the largest site in the US, a multimillion-dollar LCD screen factory complex for Foxconn in Wisconsin.

Mr Naughton said the company is on track to have doubled the number of people it employs to 50 by the end of 2019.

“We’re in with many of the top contractors in the US and there is a lot of growth potential within them for us so there are massive opportunities for us and while there are competitors out there, none of them are tailored to fully meet the needs of the construction industry in the way that we are,” he said.