SoftBank looking ahead to second wave of startup funding 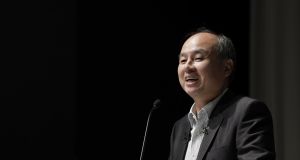 SoftBank’s second Vision Fund could start investing as soon as next month, founder and chief executive Masayoshi Son said, as the technology conglomerate reported a leap in profits at its first $100 billion (€89 billion) fund.

SoftBank said last week it had secured $108 billion in pledges for its Vision Fund 2 (VF2) from participants including Microsoft and Apple, without breaking out their individual contributions.

The anchor investors from the first fund, Saudi Arabia and Abu Dhabi, are showing “high interest” in taking stakes and negotiations are ongoing, Mr Son said on Wednesday after SoftBank turned in first-quarter operating earnings that blew past consensus estimates.

That result was aided by a stellar performance at the first Vision Fund, whose operating profit jumped 66 per cent year-on-year to 397.6 billion yen (€3.34 billion) for the three months ended June.

Many Japanese companies are sailing using an old map. Using our new map we are looking for a new continent

SoftBank is relying on proceeds from the first Vision Fund (VF1), along with other assets, to bankroll its $38 billion contribution to the second fund.

“Vision Fund 2 could start investing pretty soon, next month or the month after,” Mr Son said.

With the first fund having spent much of its capital on fast-growing, late-stage startups such as Uber and WeWork parent the We Company, SoftBank is now turning its attention to the second fund to maintain its oversized industry presence.

“Many Japanese companies are sailing using an old map. Using our new map we are looking for a new continent,” Mr Son said.

The first fund’s $66.3 billion investment in 81 firms is now worth $82.2 billion, as the value of its bets in firms such as hotel chain OYO, workplace messaging app Slack and delivery service DoorDash has grown.

But much of the fund’s gains are paper profits, with its unrealised gains in the first quarter at 604 billion yen (€5.08 billion).

That was, however, offset by 195 billion yen (€1.64 billion) in unrealised losses from a drop in value of its stake in firms such as ride-hailing firm Uber, which is trading below its IPO price.

SoftBank’s results have been increasingly volatile as Mr Son shifts focus from the predictable income of telecoms in favour of bets on startups with shifting valuations.

The number was, however, down 3.7 per cent from a year ago when results were propped up by a stake sale in chip designer Arm’s China business.

SoftBank’s shares, which have risen 42 per cent this year, closed down 0.2 per cent ahead of the earnings.

1 AIB concedes Covid-19 mortgage policy was ‘regrettable’
2 Stripe lures Dhivya Suryadevara from General Motors to be CFO
3 ‘No demand... because there are no people’ at well-known Dublin pub
4 Revolut losses tripled before Covid-19, despite rise in users
5 Revised help-to-buy scheme opens for applications
Real news has value SUBSCRIBE