Fantasy football in the office: a game-changer or own goal? 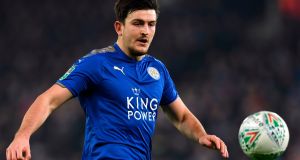 Manchester United has just bought Leicester City’s Harry Maguire for a reported fee of £80m - but how many Fantasy Premier League players will splash out on the defender? Photograph: Paul Ellis / AFP.

This Friday marks the first game of the English Premier League football season. For more than 6 million people worldwide this also means the start of the Fantasy Premier League.

The FPL allows fans to manage fictional football teams. The virtual gamers select players for their team and compete with others in their league based on the real-life performance of their picks during the season. It is a free platform, run by the Premier League, and is part of the wider fantasy sports market - estimated to be worth about $14 billion in 2018, according to Orbis Research.

Many offices run leagues among their employees, creating friendly competition and an opportunity to bond over a successful pick for this week’s team. But while there can be benefits in terms of employee engagement and socialising, there are concerns about productivity and inclusion.

Some 62 per cent of workers found participating in a league boosted their morale, according to research by employment and HR specialist Peninsula. Nearly half (49 per cent) of respondents also said it helped build relationships with colleagues.

It gives you something to talk about with your colleagues “in the elevator or when you’re having a coffee”, says Tom Cantle, co-presenter of Who Got The Assist, a weekly FPL podcast. “It’s a niche activity so when you get talking to someone else who’s really engrossed you have a lot to discuss.”

For those with limited interest in watching live football, the FPL platform provides a wealth of data about the 10 weekly games that can be used to predict the best transfers without spending 90 minutes in front of a screen.

“There are people with a minimum interest in football who play the game with numbers and do really well,” says Mr Cantle. “When you watch football it is very subjective, but stats can give you an objective perspective.”

Mr Cantle likens FPL to investing. “You want to maximise points for a given budget,” he says.

He and his co-presenter Nick Harris use their backgrounds in data analysis and behavioural sciences to give a different perspective on the game. “A lot of finance is about psychology and behaviour,” he says, adding that they use these concepts to explain the data in a way that is “akin to analysing the market”.

The data-driven nature of the game means that it is possible to use artificial intelligence to manage your virtual squad, using “bots” like those provided by analysis website Fantasy Football Fix.

This means you do not even need to go to the trouble of picking your own team to compete with your colleagues.

This approach can produce some enviable results. The Alan Turing Institute’s AIrsenal is a “machine learning manager” that used AI to finish in the top 30 per cent of players worldwide last season.

“It uses three years’ worth of data to calculate the probability of each scoreline for a match and then for each result the probability that a given player scores,” says Dr Nick Barlow, a senior research software engineer who works on the project.

Research also suggests that applying a fantasy football-style approach to work environments can improve performance. A director of a US home building company ran an experiment to test whether “gamification” could improve the performance of his sales teams.

The competition required managers to put their reps into their fantasy team, with the overall department making a league. Each “player” was measured against an ambition score based on their performance in three critical areas. The results were impressive with a 200 per cent increase in the number of retail store visits referred by the inside sales team, for example.

But the impact of a workplace league may not be wholly positive. Outplacement consultancy Challenger, Gray and Christmas estimated that in the US more than $16.8 billion in revenue is lost during each NFL season from employees working on fantasy teams during office hours.

This is based on an estimate of losing one hour a week per employee who plays. But this could be conservative: a survey from fintech start-up OppLoans suggests that employees spend on average 6.9 working hours every week on their fantasy team during the football season.

Office leagues may also face challenges around inclusion. The Fantasy Sports and Gaming Association reports that just 29 per cent of fantasy sports players in the US and Canada are women, although the proportion is rising. This year’s World Cup raised the profile of women’s football - a record-breaking 28.1 million people watched BBC coverage of the final.

Holly Shand, a teacher in Hull in north-east England, says she started playing “through a group of guys at work” during the 2014 World Cup. Her success in the league inspired her to start Fantasy Football Community, an FPL analysis website.

She says when she started out there was some negativity from the male-dominated online community, but her success - including finishing in the top 10,000 players internationally twice in the past five years - quickly put pay to the naysayers.

“Attitudes towards women in football as a whole have improved over recent years,” she says. “Traditionally it’s men who have football instilled in them at an early age but there are definitely more women now.” As a consequence female engagement in FPL is “definitely growing”, she adds.

The season will kick off at Anfield on Friday with Uefa Champions League winners Liverpool playing newly promoted side Norwich City. Whether or not you watch the game, if you are thinking about joining your office league it is worth making your team soon to avoid missing out on first week points.