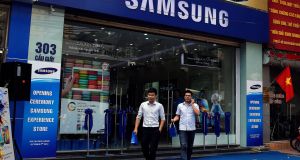 Samsung has turned to augmented reality to help hook users in to the Galaxy S9. Photograph: Luong Thai Linh/EPA

It’s been a tough few years for Samsung. No sooner had the electronics company emerged from a painful – and expensive – recall of its flagship Note 7 than it was hit with the arrest and subsequent corruption trial of its chief executive in South Korea.

But the company has pressed ahead with the launch of more smartphones, with the flagship S9 and S9 plus now on general sale.

This time around Samsung seems to have adopted the mantra “if it ain’t broke, don’t fix it”. The new smartphones are not immediately distinguishable from their predecessors, unless you’ve opted for one the lilac purple version. Instead, Samsung has been working on perfecting what it says is one of the top features of smartphones for users: the camera.

The cameras perform better in low light. They’ve had some extra smarts added too, with Bixby Vision offering instant translations just by pointing the camera at a street sign or menu.

Both models have had refinements to the camera to make it perform better in low light including a dual aperture camera, from f1.5 to f2.4.

Head of Samsung UK and Ireland Conor Pierce said demand for the phones was evenly split between the S9 and S9 Plus at the pre-order stage, and about 50 per cent were opting for the plain black version.

Of course, Samsung isn’t putting concrete figures on pre-orders, but Mr Pierce said figures for the device were really solid, despite a shorter pre-order period than before. It’s not just about overall numbers though, he said.

“We track the velocity of the pre-order,” he said. What’s encouraging for us is that we see a higher velocity of pre-order.” That could be attributed to a shorter window to make those orders, he said, but he is taking it as a positive.

Add into that the number of iOS users Samsung says are switching in the pre-order period and you have a happy company.

“We’ve seen more people switching from iOS to S9, more than they’ve seen in any pre-order period before,” he said.

“I’m very cautious to say the tide is turning, because I’ll never be accused of being complacent,” he said, adding there was a lot more to do to get Samsung to the top of the premium mobile market.

Samsung has turned to augmented reality to help hook users in to the S9, with personalised emojis available in the S9 and S9 Plus.

Virtual reality is still part of the company’s playbook though, with Samsung working with fire services in the UK to help educate young drivers on the realities of traffic accidents.

“I do believe that it will be a massive platform where people will communicate in the future,” he said. “We’re just at the tip of the iceberg.”