Breaking up with your phone is hard to do 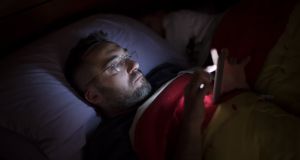 Constantly tapping those apps is not just taking you away from your loved ones, this habitual checking of updates, swiping between apps and scrolling through feeds is doing something to our brains

“About 2½ years ago I had a baby, and one moment that sticks out in my mind was sitting with her late at night. I had this out-of-body experience where I saw what the scene would look like from the outside: she was looking up at me and I was looking down at my phone, and that made my heart sink because I realised I don’t want that to be the first impression she has of a human relationship, let alone her mom.”

This moment of insight for Catherine Price, journalist and author of How To Break Up With Your Phone, made her think about the complicated, compulsive and often addictive relationships we have with our smartphones. Many of us stare at our screens as we cross the road, while in bed, during meals, in the bathroom, and even around our children.

For Price it brought to mind the famous 1975 developmental psychology experiment known as the Still Face Experiment: babies were observed after three minutes of interaction with their mother, who was instructed to remain non-responsive and expressionless. These infants, primed to expect loving attention, became profoundly upset and eventually withdrawn.

“I thought, my god, that is what we’re doing en masse to babies and kids: we are basically performing the Still Face Experiment by staring into our devices as they try desperately to get our attention,” she says.

In an attempt to break this pattern of smartphone dependence Price researched smartphone use and came across data gathered by the makers of Moment, an iOS app that encourages users to spend more time away from their devices. Analysing their 4.8 million userbase, they found the average person is spending almost four hours a day with their screens on, not counting time taken for telephone calls.

“We are up for 16 hours a day roughly, so that’s a quarter of our waking lives. I would personally conclude that my phone was having a detrimental effect on my life, but regardless of what judgement you end up making four hours is a long time.”

Price talks about the words used to describe our smartphone interactions. Some would say perhaps we depend on them a little too much, others might talk about compulsive use or even additive behaviours. Others just dismiss it as part of modern life.

“Once you become aware of any negative impacts on your life – if you can’t pare back then perhaps you do have an addiction. Although at the end of the day I don’t know how much the semantics matter because to me the important thing is how you and your loved ones feel about your relationship with your phone.”

And constantly tapping those apps is not just taking you away from your loved ones and out of the present moment; this habitual checking of updates, swiping between apps and scrolling through feeds is doing something to our brains.

“One of the biggest impacts is how our phones affect our ability to concentrate and focus on one task at a time. Evolutionarily our brains don’t want to be able to focus, that’s not a natural state for us, one of the reasons being if you’re in an environment where you might be eaten, you want to be very tuned into even the slightest distraction because it might indicate a threat.”

While Price acknowledges that smartphones are not the first technology to come along and distract us, there is one key difference: they sit beside us or in our pockets, providing frequent, instant, and repeated stimulation that is both distracting and seductive.

She describes it as “a very intensely-focused state of distraction” where the smartphone user is both tuned out to everything around them but also distractedly flipping between apps or jumping between different posts on one app.

“That is the very kind of stimulation that helps to change our brains. And since we naturally want to be distracted it is actually encouraging our brain to go back to this natural state of distraction.”

Nicholas Carr wrote about this in The Shallows: What the Internet is Doing to Our Brains. Describing the effect of the repeated use of internet technologies, which have the hallmarks of short and instant bursts of information, he says “old mental circuits begin to break apart”.

“The circuits that enable us to sustain our attention on, say a New Yorker article or a whole book, without checking our phones – those begin to weaken with disuse so for me this is particularly disturbing,” concludes Price.

If this is the case for adults, we should consider what frequent smartphone use is doing to the developing brains of children and adolescents. What should parents be doing?

“I think the first issue is that it shouldn’t be parents alone; they are going up against a societal norm, so you become that one parent limiting a child’s phone. That’s a really difficult battle and a difficult sell. So it needs to come from all levels of public health awareness: it needs to be doctors that are saying too much screen time is unhealthy, it needs to be teachers not assigning absolutely every piece of homework online,” says Alanna Harvey, co-founder of Flipd, an app designed to help students and educators cultivate healthier smartphone habits.

Students don’t always have an opportunity to disconnect, says Harvey. “I hear parents complain about kids always being on their phone but the kids are saying: ‘I’m doing homework or Facetiming a friend while we do group work together.’

“I would argue that giving kids an opportunity to unplug and be disconnected is such a novelty nowadays that it can be in and of itself an engaging and exciting experience for them; to be given homework on a piece of paper and not always online.”

Flipd is designed to help educators and students work together to get smartphones out of the classroom or lecture hall. The app is like a screensaver: turning it on for a set amount of time activates a screenlock with a timer. Educators can use the app as part of their lesson plan, asking students to “flip off” for the duration of class and afterwards they can see stats on who put their phones away or who was tempted to bypass the app and check their phone.

“It cuts right in between you and that instinct of habitual checking. It’s there to remind you: this is not what you’re here to do, you’re supposed to be paying attention right now. At any point if they want to give up and leave Flipd, they can. But Flipd is telling you: okay, you’ve made that choice by sending a notification telling you you’ve failed.”

“Some of best feedback I’ve heard from students is that they like knowing when they come to class that collectively they and their peers have decided: ‘we are here to unplug as much as we can’. A professor I worked with calls it ‘giving students permission to unplug’. Instead of having such a negative connotation – let’s ban phones from the classroom – it is reframed,” says Harvey.

There are also initiatives like National Day of Unplugging, which ran from sundown on March 9th to sundown on March 10th. Started by the Center for Humane Technology (co-created by ex-Googler Tristan Harris) the idea is to take a break from technology through group activities or otherwise. Families and schools are encouraged to take part by using the centre’s activity toolkit and a free “sleeping bag” for their smartphone.

But it isn’t the smartphones itself that is problematic – it’s the apps we install. Shouldn’t we think about uninstalling them rather than locking the phone in a drawer?

These apps are literally designed to encourage compulsive use that may have negative consequences on our lives. The Center for Humane Technology contends: “Snapchat turns conversations into streaks, redefining how our children measure friendship. Instagram glorifies the picture-perfect life, eroding our self-worth. Facebook segregates us into echo chambers, fragmenting our communities. YouTube autoplays the next video within seconds, even if it eats into our sleep.”

Price say the most important thing to ask yourself is: what do you love about the phone and social media and what do you not love? Social media might help you keep in touch with friends but it also sucks you in or inundates you with angry chatter.

“Tristan Harris talks about this a lot: these apps are designed to get our brains to release dopamine, which is a neurotransmitter that tells us when something is worth repeating. So when you go on social media and see something that interests, delights, or even upsets you, dopamine is released and tells you: oh, you should check your phone again because you’ll get some kind of quote unquote reward for doing so.”

Price finds that stopping cues can help: buying an old school alarm clock to replace the phone alarm; putting a book by your bedside and leaving the phone to charge in the living room; installing apps like Moment or Flipd; deleting social media apps and switching to desktop use; turning off unnecessary notifications.