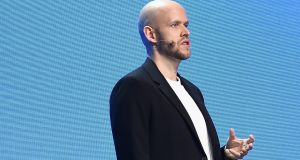 Spotify will begin trading on the New York Stock Exchange on April 3rd, just a week after the company plans to provide its most recent annual financial guidance. The music-streaming company announced the timing at an investor day on Thursday, in a live-streamed hours-long event designed to introduce the company to public market investors.

Spotify will skip the roadshow meetings and media interviews that are typical in a traditional initial public offering. The company will give its first annual financial guidance on March 26th.

Chief executive Daniel Ek said Spotify had chosen this route because “going public has not been about the pomp and circumstance of it all”. Mr Ek also doesn’t want to impose the post-IPO lockup period on existing investors, where they aren’t allowed to sell shares for a number of months after the shares start trading. The company is skipping the usual price discovery process of an IPO.

Spotify and its advisers won’t be setting a range for the company’s shares before they start trading. Instead, its first public market valuation will be set just before the stock lists, based on the number of shares that existing investors want to sell, demand from those willing to buy and the price that the parties agree on. As of March 9th, Spotify had 183.6 million ordinary shares outstanding, according to a filing. – Bloomberg