Some €1.4bn has been wiped off Ryanair’s market value since it began cancelling flights 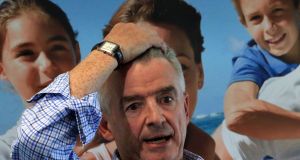 Ryanair’s chief executive Michael O’Leary speaking at a press conference in Dublin to defend the airline over its decision to cancel up to 50 flights a day to deal with a staff rostering issue. Photograph: Nick Bradshaw

News that the airline was planning to cancel thousands of flights over the next six weeks and a potentially costly European court ruling have wiped almost €1.4 billion off Ryanair’s market value since last Wednesday.

Speaking in Dublin on Monday, Mr O’Leary said that Ryanair had ended talks on a possible deal to transfer passengers from its network to Norwegian Air’s long-haul services. The pair were previously reported to be close to an agreement.

“We have brought talks with Norwegian to an end,” Mr O’Leary said. He added that his company did not believe that the Scandinavian group had the resources to stay trading for the next year.

A Norwegian spokesman confirmed that the talks with Ryanair had ended. The carrier recently agreed a partnership with another of the Irish airline’s competitors, Easyjet.

The spokesman dismissed Mr O’Leary’s comments on its finances. “Norwegian has been profitable for the last 10 years, with a strong liquidity, together with owning a substantial share of Bank Norwegian, which has a market value of over 17 billion Norwegian Krone (€1.8 billion),” he said.

The loss of pilots to Norwegian has been partly blamed for the rostering problems that forced Ryanair to announced that it was cancelling an average of 50 flights a day for six weeks.

However, Mr O’Leary said that “fewer than 100” Ryanair pilots had left to join Norwegian over the past year. He denied that his company faced a shortage of such staff.

Ryanair moved on Friday to say it will operate a programme of flight cancellations over the next six weeks because of pilot shortage difficulties.

The disruptions to its flights schedule will affect 400,000 travellers, including some who are abroad and are expecting to return home with the airline. Ryanair has said that it will offer most of them alternative flights on the same day as their cancelled bookings.

Mr O’Leary estimated that the cancellations could cost up to €25 million, depending on how many of the affected passengers took up the airline’s offers of alternative flights.

Lack of clarity over precisely which flights are affected risks undermining sales over the six-week period.

The Commission for Aviation Regulation is meeting to discuss Ryanair’s decision. News of the cancellations came a day after the European Court of Justice (ECJ) ruling that the airline’s crew members may be able to bring industrial relations disputes before courts in the countries where they are based.

Ryanair’s long-standing position has been that crew are employed under Irish law and any contract disputes fall under this jurisdiction. However, its chief executive said that the two events were not connected.

Although Ryanair has said that the ECJ ruling will not increase the company’s costs, Merrion Capital analyst Darren McKinley has estimated it could cost as much as €40 million next year, rising to €100 million in 2019.

The flight cancellations “coupled with the noise surrounding last week’s ECJ ruling are unwelcome for the airline and likely to weigh on the share price”, Mark Simpson, analyst with stockbrokers, Goodbody, wrote in a note to clients before trading got under way in Dublin on Monday.