Telcos threaten to boycott Eir network in row over pricing

Companies, including Vodafone and BT, are unhappy with Eir’s connection charges 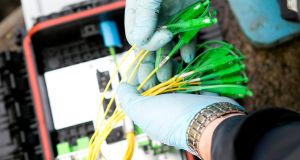 Telecoms firms, including Vodafone and BT, are considering a boycott of Eir’s wholesale network in parts of rural Ireland in a row over pricing.

The firms, which use Eir’s network to deliver their own broadband bundles, claim the company’s connection fees are uncompetitive and out-of-kilter with European norms.

Eir’s infrastructural arm, Open Eir, currently charges €270 to connect broadband customers if they are located more than 50 metres away from the network.

Retailers using Eir’s network can either absorb the cost or pass it on to customers. Eir’s retail arm currently waives it.

Eir’s rivals have long been unhappy with the charge, which has been approved by regulator Comreg, claiming it creates a barrier to entry to the market and stymies consumer choice.

In a statement, Eir said: “Providing best in class technologies such as fibre to the home carries significantly higher costs in rural locations than in urban and suburban locations.”

It said in many cases the actual cost of providing a fibre connection in rural Ireland was higher than the regulated price it charges.

“The cost of connections charges to deliver electricity or gas services in rural environments is significantly higher than the connection charge for the delivery of fibre to the home,” a spokesman said.

Alto, the umbrella group that represents firms other than Eir, cited a report by telecoms consultancy Analysis Mason, which shows Eir’s fee is more than twice the equivalent charged in the UK and a multiple of the fees charged in other European countries. It also noted that Eir’s rival here, Vodafone-ESB joint venture Siro, charges a connection fee of €70.

In protest, Alto firms are considering a boycott of the 300,000 homes recently carved out of the National Broadband Plan (NBP) and placed back into Eir’s commercial rollout.

“This news serves to remove consumer choice from the market, in a market that is already at sea, when it comes to providing basic high speed services particularly in rural Ireland,” he said.

Mr Lupton also claimed the boycott threat called into question whether the 300,000 NBP deal hatched between the Department of Communications and Eir was good for Irish consumers.

“Perhaps it is time for a change in behaviour from Eir as well as a root and branch review of ComReg’s powers to regulate the market efficiently and effectively. If both issues were forthcoming, this might result in more economic behaviour and foster consumer choice,” he said.

Sky, which is a member of Alto, said: “We make submissions, like all other operators, to ComReg on this issue (the €270 FTTH charge) and our view is that connection charges should be subject to cost orientation principles as proposed in ComReg’s consultation earlier this year.

To clarify, Sky Ireland has no plans to boycott Eir’s FTTH service nor have we ever considered such action.”

The regulated price Eir charges other companies for pole and duct access appears to be at the centre of the latest delay to the long-awaited NBP.

To get at the 540,000 homes covered by the State scheme, the winning bidder or bidders will have to transit through Eir’s network.

The price Eir charges for this access will have a major bearing on the cost of the scheme and needs to be ironed out before the Department of Communications can proceed with procurement.

Comreg is currently examining Eir’s accessing pricing and is expected to report on the issue in the coming weeks.

1 Whiskey a go go: sales top $1bn in US
2 Ten of the most mysterious aircraft disappearances
3 Election adds to headaches for AIB boss Colin Hunt
4 Dating apps move past their shaky start
5 Should I sell the old family home to allow children buy apartments?
Real news has value SUBSCRIBE