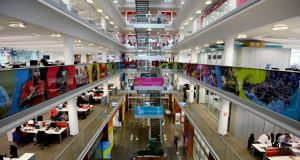 Eir said on Thursday that its hedge-fund owners are in talks with a potential investor seeking to take a “significant” stake in the firm. Photograph: Alan Betson/The Irish Times

Eir said on Thursday that its hedge-fund owners are in talks with a potential investor seeking to take a “significant” stake in the firm.

The development comes after The Irish Times reported that the owners, led by New York’s Anchorage Capital, which owns 42 per cent of Eir’s equity, were weighing a possible trade sale of the group instead of a stock-market listing, which had been previously been seen as the most likely sale option and was mooted for as early as next year.

It is not clear whether the potential investor would inject fresh capital to Eir, to allow it to reduce its €2.3 billion gross debt or invest further in its network, or buy out sizeable holdings of the company’s existing shareholders.

Another US hedge fund, Davidson Kempner, currently owns 14 per cent of Eir, while Singapore sovereign wealth fund GIC, which acquired an initial stake in Eir early last year, has a 20.6 per cent holding.

“The major shareholders of Eircom Holdings SA (EHSA, the ultimate owner of Eir) have informed the board of [EIR]that they have been approached by a potential investor who may wish to make a significant investment in EHSA alongside them,” the company said.

“In so informing the board, the major shareholders have affirmed their continuing commitment to their investment in EHSA for the foreseeable future. There can be no certainty that the discussions between the shareholders of EHSA and the potential investor will result in a transaction.”

Eir’s chief executive Richard Moat said on Thursday, after the company reported a 4 per cent earnings increase for the year to June, that the business was progressing well from an operational standpoint and in terms of its revenue and growing profitability, and that he was focused on maintaining that, and not on its future ownership.

He described the possibility of an initial public offering (IPO) as a “theoretical option”, which would appear to be a slight cooling of his position from late last year, when he described an IPO as more likely than a trade sale.

As well as Anchorage, Eir’s shareholders include Singapore sovereign wealth fund GIC, at 20.6 per cent, and US fund Davidson Kempner, at 14 per cent.

Meanwhile, Mr Moat highlighted that the three months to the end of Eir’s financial year in June comprised its ninth consecutive quarter of earnings growth, as it builds financial momentum.

The company also cut its costs by €26 million.

It has 551,000 customers signed up to broadband, a quarter of which it says are on so-called “triple play” services.

1 Why the notion that building more houses will cure our housing woes is bogus
2 Life as a Facebook moderator: ‘People are awful. This is what my job has taught me’
3 Irish companies restrict travel over coronavirus fears
4 Suspicions rife as key Brexit trade talks begin in Brussels
5 Corona beer firm reeling after 8% slide due to coronavirus
Real news has value SUBSCRIBE