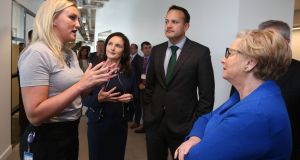 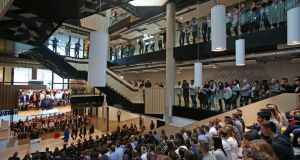 The 17,650sq m building is the company’s Europe, Middle East and Africa (EMEA) headquarters and was built to facilitate LinkedIn’s 1,200 employees in Ireland.

“It’s a magnificent commitment to Dublin...and this is LinkedIn’s largest operation outside the US,” Sharon McCooey, head of LinkedIn Ireland, told The Irish Times. “It’s an investment in our team. We’re creating a remarkable workplace to do remarkable things,” she added.

Speaking at the opening ceremony, Taoiseach Leo Varadkar praised the internet giant for its commitment to Ireland in 2010 when “we were in the middle of one of our darkest periods economically”.

“The Government is committed to maintaining our stable and competitive corporation tax regime and our strong incentives for research and development so we can continue to attract and retain inward investment and create high quality jobs,” Mr Varadkar added.

Also at the opening was Tánaiste and Minister for Jobs, Enterprise and Innovation Frances Fitzgerald, who spoke of the diversity at the company which, she said, reflected the “huge diversity that Dublin has to offer”.

Following this investment, LinkedIn’s Dublin facility is at almost 62 per cent of capacity. Currently the company has more than 70 jobs on offer at its new EMEA headquarters.