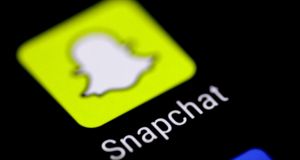 Snap: Wall Street analysts have concerns over the sustainability of the company’s new-found momentum. Photograph: Reuters

Snap, the company behind Snapchat, on Tuesday evening beat Wall Street’s forecasts for the first time since its initial public offering almost a year ago, sending its shares soaring as much as 27 per cent in after-hours trading.

The stock’s sudden reversal took it above the $17 (€13.76) IPO price after more than six months in the doldrums. It came despite Snap’s warning that its year-on-year revenue growth rate of 74 per cent in the fourth quarter would “moderate” in the first quarter, as brand advertisers pull back on their spending after the holidays.

The root cause of Snap’s troubles in the past few quarters has been a painful shift in its advertising business, from traditional sales team to a self-service auction where prices are set algorithmically. That depressed ad prices at the same time as Snapchat was struggling to attract as many new users as investors were hoping for.

Both issues were addressed in Snap’s fourth-quarter results.

Daily active users increased by 8.9 million, or 18 per cent year-on-year, to 187 million, the strongest growth in more than a year. That in turn helped fuel revenues of $285.7 million, ahead of the $253 million analysts had forecast. More than 90 per cent of Snap ads are now bought through the “programmatic” system, suggesting the worst of the transition is behind it.

“Our business really came together towards the end of last year,” said Evan Spiegel, Snap’s chief executive, on a conference call on Tuesday evening.

“We did not hear any commentary nor observe any data which causes us to meaningfully alter longer-term variables in our model,” said Brian Wieser of Pivotal Research.

To win over such sceptics, Snap is pressing ahead with changes to its products and how it runs its business.

It is slowing the rate at which it hires, as it prepares to consolidate several small offices scattered around Venice into a new larger headquarters in Santa Monica in the first half of the year.

Net losses more than doubled to $350 million in the past quarter but Snap said it had reduced its cash burn by 49 per cent over the prior quarter to $255 million, as the economies of scale of its self-service advertising business started to kick in.

As the cost of advertising on Facebook and Google rises, Snap is hoping its more affordable rates can help it tap into a longer tail of small businesses looking to reach its young, mobile audience. The number of advertisers using the auction system doubled over the prior quarter.

Boosted by holiday demand from advertisers, average revenue per user - a key metric for investors - was up 46 per cent year on year to $1.53. At the same time, costs per user increased at a slower rate, benefiting gross margins, which reached 36 per cent.

In the run-up to these results, investors had been concerned about the potential impact from a radical redesign of Snapchat, which split messaging with friends into a section separate from professional content from news publishers and video producers.

The rollout of that update has progressed more slowly than Snap initially suggested, reaching only 40 million or a fifth of its total audience so far. Mr Spiegel reiterated that it would “take time for our community to get used to the changes” as Snap completes the deployment by the end of March.

“There is a lot of work ahead as we optimise the updated application, but our early observations support the thesis behind the new architecture and the many growth opportunities that it provides,” he said.