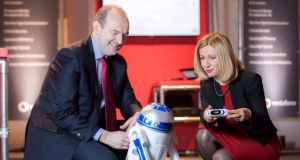 John Griffin, head of Ericsson Ireland, and Madalina Suceveanu, chief technology officer at Vodafone Ireland, demonstrated 5G speeds of the future at an immersive exhibition at the Douglas Hyde Gallery

Vodafone Ireland has promised the rollout of 5G within 24 months, having successfully demonstrated the mobile technology at an event in Trinity College Dublin.

The telco and its technology partner Ericsson achieved superfast broadband speeds of 15 gigabit per second with a latency of less than five milliseconds. It also tested pre-standard 5G across its recently acquired 3.6GHz spectrum.

“We expect 5G to be the technology of the internet of things,” Vodafone’s chief technology officer Madalina Suceveanu told The Irish Times.

The fifth generation of mobile technology has been long touted by telcos and research firm Ovum has indicated that while fully standardised 5G won’t be commercially available generally until 2020, adoption is expected to be rapid.

Mobile World Congress organiser GSMA has forecast there will be 1.1 billion 5G connections globally by 2025.

5G brings not only faster mobile speeds but lower latency, increased security and reliability, and the ability to connect massive numbers of devices in a move that is expected to see increased take-up of internet of things (IoT) devices – including household items such as fridges – that can communicate with each other.

“We are in the 4G era today and that is really the era of the smartphone and about humans using phones to access services...by contrast, the 5G era is about connecting everything else from lightbulbs to automative vehicles to robots.

“We expect these 5G services to be truly revolutionary, while the technology itself is quite evolutionary. For the first time we are deploying a new generation of technology over existing technology,” he added.

The telco intends to deploy 5G radios on top of base stations for 4Gs and will then connect the signals.

Ms Suceveanu said the result of rolling out 5G on top of the existing 4G network is that customers should not see any disruption in the coming years. It also said users should see improved 4G services in the near future as it continues it investment in that technology.

At the event in Dublin on Wednesday, a number of demos showcased 5G, showing applications covering everything from its use in healthcare to how easy it is to stream high-quality movies.

Vodafone said the rollout of 5G will commence within 24 months. It would not be drawn further on its exact plans to deploy the technology. The rollout of 5G comes a few months after Vodafone announced a new narrowband Internet of Things (NB-IoT) network in the docklands area of Dublin, which promises to introduce a number of smart technologies including parking bays that tell drivers when free spots are available and rubbish bins that alert authorities when they are full.

– Connecting massive numbers of devices: the exponential growth of connected IoT devices is driving more and more use cases, such as smart vehicles (from asset tracking and remote monitoring, to Vehicle to Everything), with the next-generation network needing to provide a reliable response to billions of devices

1 Who are Ireland’s 17 billionaires?
2 My father in a nursing home wants to gift me his house
3 Countries that fail to attract immigrants will lose out – Microsoft chief
4 Are there annual limits on inheritances or gifts to a child?
5 Proinsias O’Mahony: Should investors ‘drop their shorts’?
Real news has value SUBSCRIBE