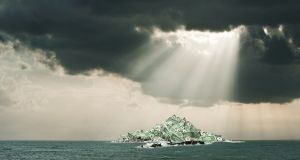 Is the exchequer about to get another mini windfall, as liabilities are settled up? Photograph: Jon Boyes

Are there still people with vast amounts of undeclared tax held offshore? We may be about to find out. The Revenue has put the “frighteners” on, warning those who have stashed cash overseas that after May 1st they will not be able to make a qualified disclosure. While not an amnesty, this is when a taxpayer goes to the Revenue with their hands up and admits their sins, in return for which they pay somewhat lesser penalties and can avoid having their name in the published list of defaulters. Under the 2016 Act, those with assets held offshore will not be able to avail of this after May and will face the fill rigours of penalties and publication.

So far this has only led to a paltry 15 people making declarations. We must assume that it was for this reason that the Revenue decided to send out warning letters this week. These are likely to have an impact – and as ever the rush we will see will no doubt be in the immediate run-up to the May deadline.

Those old enough will remember the queues outside tax offices in 1988 and 1993, when Revenue held actual amnesties, on the deadline night. The 1993 amnesty was originally intended only to apply to cash held offshore, but its terms were amended after advice that the same “ deal” also had to be offered to people with hot money at home. And there was plenty of that, too, in an era when building societies in particular used to advertise coyly about the “confidentiality” of their services.

Back then, offshore cash hidden from the tax authorities was much more common. High-rollers had their money in places such as the Cayman Islands, home to the infamous Ansbacher accounts. But those with smaller deposits also often opened accounts in Newry or the Isle of Man, helped by their local bank manager.

In an era of much tighter regulation, you would have thought that this was less common. Of course there will be people who have, for example, inherited foreign properties and never declared the rental, or have hidden money in offshore banks. But surely this is not still happening on the same scale as the 1980s or 1990s? Or is it? And if it is, is the exchequer about to get another mini windfall, as liabilities are settled up?