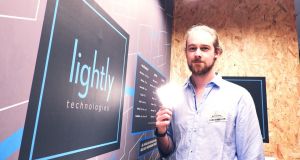 Matt Hanbury is on a mission to shake up the lighting sector with a paradigm shift in how ultra-thin light sources are produced. In January last year, he created Lightly Technologies to make it happen and his Hikari SQ light bulb will be launched on international markets early next year.

Hanbury is a mechanical engineer who has worked for Philips Lighting in the UK and Germany on LED and OLED (organic light-emitting diode) technology. He has also worked with Apple in Japan where his focus was on LCD displays for the iPhone 6S and 3D touch. OLED is a relatively new (and expensive) technology that makes products such as ultra-thin TVs with improved image quality possible. However, Hanbury, who recently beat off stiff international competition to win the Society of Light & Lighting’s young lighter of the year award, is not convinced by it.

“OLED lighting is currently our main competition, but our product is superior in performance and lower in cost,” he says. “Our product will dramatically disrupt the OLED lighting sector as our patent-pending technology is superior to it in every metric from light output and efficiency to lifetime and cost.

“Rather than investing in stalled OLED technology – there has been very little technical progress in OLED in the last three to four years despite huge investment – we approached the problem from a different direction and have re-engineered existing LED technology to create the same, highly desirable, appearance and form,” he adds. “There are many LED light bulbs on the market each with a different niche purpose in the industry. Our value is in the unique styles of lighting that can be created with our technology but not with other LED sources, for example ultra-thin, decorative chandeliers and luminaires.”

Potential B2B customers for Hikari SQ (a combination of the Japanese word for light and the English word square) include lighting manufacturers, designers, architects and others in the professional lighting sector. The product is particularly suited to decorative use in retail and hospitality venues and high-end office developments.

“While we don’t launch officially until next year, from the end of this month [November] we will be supplying developer kits of engineering prototypes to our early adopter customers so they can start their own product development with our technology,” Hanbury says. “For this we are charging a flat fee and will be shipping the kits to customers in Ireland, the UK, Germany, Italy and The Netherlands.”

The Hikari SQ looks like a tile and produces a surface of white light that can be built into different fixtures. Hanbury says it combines the best of his experience in the OLED lighting and LCD display industries and that it has numerous applications in domestic and commercial settings. “There is huge interest in OLED lighting in the professional lighting market and companies such as Philips and LG have invested almost $500 million over the last six years into the technology between them,” Hanbury says. “Our product enables luminaire and lighting designers to create real value through innovative design – something you can’t do with OLED because it’s still too expensive and the performance isn’t good enough.”

Lightly Technologies is based in Dublin and employs Hanbury and former Philips Lighting executive Brian Charman, who is responsible for the commercial side of the startup. The company is planning a seed funding round in early 2018 to raise about €600,000 and Hanbury says the team will be expanded at that point. The manufacturing of the Hikari SQ is being outsourced to China. Development costs to date have been in the order of €130,000 which has come from personal resources and angel investors while Enterprise Ireland has also supported the venture through its New Frontiers programme at DIT Hothouse.