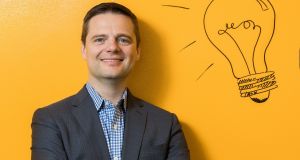 Globoforce, an Irish software firm that operates employee reward and incentive schemes for some of the world’s biggest companies, has said it is continuing to weigh up a public listing.

The move comes as the group reported a 35 per cent jump in profits for 2016 as turnover easily surpassed the $300 million (€252 million) mark.

Globoforce pulled out off a planned IPO on the Nasdaq in March 2014, citing unfavourable market conditions. Speaking to The Irish Times, Mr Mosley said the company is currently looking at a possible flotation, but said it would seek a listing if the right conditions are in place.

“We continue to look at the public markets. It has to be the right time though because you can do great damage by going out at the wrong time. Every year we look at an IPO and we will do so again next year, but while we are looking we’re in no rush to do it,” said Mr Mosley.

Globoforce has been both operating cash flow and free cash flow positive for each of the last nine years. The group, which has recorded compound annual growth rate (CAGR) for the last six years of 21 per cent, said cash at hand at the end of last year totalled $48.7 million.

“We’re doing extremely well with improvements to all lines in our financial results and the market is booming, which is playing into our positioning ,” said Mr Mosley.

He said the company expected the 2017 performance t to be “profitable and cashflow positive with continued growth.”

“We were the first to create the market category of social recognition and there is no doubt it has been embraced and that its time has come with major Fortune 500 companies looking at this as a way to motivate their employees,” he added.

The company has invested more than $50 million in its research and development over the last five years to improve its technology platform.

It raised more than $2 million in funding from venture capital firm Balderton Capital in 2002. A $9.3 million Series B funding round, led by Atlas Ventures, followed two years later.

The company, which employs 250 people and recently announced plans to create an additional 100 jobs in Dublin, ended 2016 with a cash balance of $56 million, up from $32 million a year earlier.

1 Why gift a son now if it eats into his tax-free inheritance threshold?
2 Dublin council puts Unicorn restaurant demolition plan on hold
3 Big Four told to outline plans for audit split in UK by October
4 Can we finally say farewell to the scourge of hot-desking?
5 Mortgage arrears: Prevention is definitely better than cure
Real news has value SUBSCRIBE