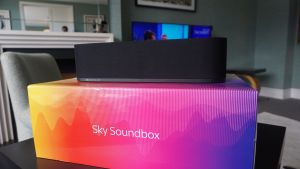 “It was only when I hooked up the Sky Soundbox to my TV that I really noticed the difference a good speaker can make.”

I’ve never really noticed the speakers on my TV. They aren’t particularly bad, but neither are they particularly great either. They’re just there, doing an adequate job, but not really standing out too much.

It was only when I hooked up the Sky Soundbox to my TV that I really noticed the difference a good speaker can make.

Sky has hooked up with French firm Devialet, a company that has made its mark with high-end wireless speakers with a price tag to match. The firm’s Phantom speaker claims to be the best speaker in the world and starts at an eye-watering €1,490.

In contrast, the Soundbox will cost Sky Q customers €299. Regular Sky customers can also avail of a heavy discount, at €349; for non-Sky customers the price tag soars to €949. The other catch? It doesn’t do all the fancy auto-changing settings that the link with the Sky Q box triggers.

So what exactly are you getting for your money with Soundbox? Compact as far as some systems go, the Soundbox offers spatial surround sound in a single box, packing six woofers and three speakers into the package. There are two HDMI ports on the back – one input, one output – so you can hook up the speaker to your Sky box, and an optical connection to handle other devices.

There’s also Bluetooth included in the box, so you can wirelessly stream music. Switching between these inputs is easily done with the slim remote control included with the box, although you can map your own Sky remote to it, and signalled by a friendly sounding voice.

Visually, the Soundbox is nowhere near as stunning as the speakers Devialet usually produces, with a fairly bland-looking black box and a few speaker grilles. It’s taller than the usual soundbar, which may cause some placement issues.

But Devialet has been more involved where it counts – the sound – and thankfully, that’s where the Soundbox really delivers.

Hooking up any half-decent external speaker system to your TV is likely to improve your sound. But the Soundbox does more than the basics.

It works with both Sky’s main Q set-top box and the Q Mini box. If you’ve got Sky Q, there are a number of sound modes that will automatically refine your audio depending on what you are watching – quiet dialogue, loud action scenes. You don’t have to choose between manually tweaking the sound or putting up with substandard audio for convenience.

The bass rumbles, although audiophiles might prefer a little more depth, and though it won’t quite match the more expensive systems for higher frequencies, it will do more than enough to impress the average viewer.

There are manual modes you can use too, such as kids mode, which limits the volume to protect young ears, and late-night mode, which cuts down the bass so you don’t annoy the neighbours. Voice mode will bring out the dialogue, which is handy for those films where you struggle to catch some lines.

It’s easy to set up too. It was up and running in under five minutes and pumping out the bass.

Placement is important. You can’t hide this away in a unit though; to get the most out of the Soundbox it needs to be able to bounce sound off the walls to achieve that 360-degree sound it promises. It needs a minimum of 15cm clearance around it, which might cause some problems in certain setups.

You can’t argue with the sound, especially with the Dolby support. If you’re a Sky customer, you’ll get the Soundbox at a heavily subsidised price. But it’s not just for Sky subscribers; if you’re prepared to pay full whack – and the price tag stings – you can use it as a regular soundbar.

Despite its compact size, the Soundbox needs a bit of space if you want to make the most of its sound quality. It needs surfaces to reflect off, so stashing it away in a cabinet isn’t going to work, neither will it do well stacked underneath your set-top box. Also, if you are looking for something budget friendly, it helps to be a Sky Q customer.

The height of the Soundbox may be an issue for some, as it comes in higher than the standard soundbar. There’s no visual input to tell you what input your connected to either – switching inputs is accompanied by a voice prompt. That voice can kick in at inopportune moments though if you have Bluetooth devices connected to it.