Fast-growing company, which employs 180 people, receives yet another award 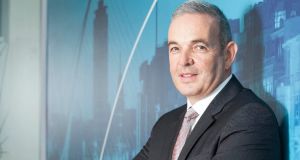 Fast growing Irish ecommerce firm eShopWorld, which was recently valued at €300 million, has picked up yet another gong after being named company of the year at the annual Technology Ireland software industry awards ceremony in Dublin.

The company was awarded the latest prize at an event at the Mansion House on Friday organised by Ibec-affiliated Technology Ireland, which represents over 200 members.

The Swords-based company, which employs 180 people, connects premium brands from Victoria’s Secret to Nike with consumers in more than 200 countries. Established in 2010, the group make it easier for retailers to sell across borders, where they deal with varying currency, tax and localisation issues.

A week ago, eShopWorld was named technology exporter of the year at the Export Industry Awards, while earlier this month is was ranked as Ireland’s fastest growing tech company in the Deloitte Fast 50 for the third year in succession.

The firm, which earlier this year announced plans to hire an additional 250 people, is forecast revenues will grow this year by 50 per cent to €300 million. It was recently valued at the same price in a recent transaction, which saw Asendia, a joint venture from the French and Swiss postal service companies, increase its stake in eShopWorld by 10 per cent to 50 per cent.

eShopworld, whose bespoke ecommerce solutions help some of the world’s biggest sports apparel, footwear and lingerie brands, now plans to exceed $1 billion (€850 million) in annual turnover by the end of 2019.

Other winners at the Technology Ireland awards on Friday included Joe Hogan, co-founder of Openet, which is reported to be the State’s largest privately-owned tech firm. Mr Hogan was named Technology Person of the Year at the awards.

Openet employs 1,000 people worldwide, with 300 at its Dublin-based headquarters. The company’s solutions process more than 20 billion events and transactions every day across more than 330 million subscribers over 75 service providers worldwide.

The other award winners on the night were Spearline, Nutritics, Aspire Technology, Ericsson Ireland, Storm Technology and Tyndall National Institute.

RTÉ held lobbying meetings with politicians 14 times in four months, register shows 16:30
Ireland’s love affair with Apple as passionate as ever 16:00
Fallon & Byrne founders McHugh and Byrne exit group 15:52
Developer Paddy McKillen loses challenge to Anglo shares report 15:31
‘If you don’t like challenges, you should not be in the airline business’ 15:05