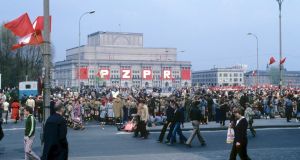 Mayday parade in Moscow in 1980, one of the photos from Marco Carnovale’s new blog

In February 1980, an Italian student of politics by the name of Marco Carnovale embarked upon an exchange programme in Communist Poland armed with a Nikon and an adventurous spirit, continuing on to explore Soviet Russia and the Eastern Bloc. Over 30 years later he turned his travels into a blog, which has a wealth of unique photographs and reminiscences of life behind the Iron Curtain.

Carnovale recollects being detained at a Czech military base where soldiers interrogate him in front of a picture of Felix Dzerzhinsky, the founder of Russian Secret Police, before joining him for an impromptu game of American football and sending him on his way. And then it’s a year of black market petrol, duck, vodka and more duck for dinner in Warsaw with the occasional bison steak and caviar thrown in.

He also makes a relatively rare visit to East Berlin (visas were required whether you were coming from Poland or West Berlin) in all its austere concrete glory before the wall fell to make way for Western decadence. Take a break from Instagram and peruse images of a forgotten Eastern Europe instead.