AI adoption could provide €48bn boost to the Irish economy 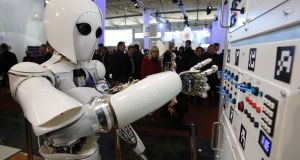 The analysis shows that the potential for AI to impact the Irish economy is slightly lower than the global average of 13.8 per cent, but higher than in many other European economies

Wider adoption of artificial intelligence (AI) could boost Irish GDP by an additional €48 billion by 2030, according to new research which also downplays the threat of widespread job losses resulting from the technology.

The PwC study finds AI presents a significant commercial opportunity for Ireland with a chance to increase gross domestic product by more than 11 per cent if its moves to embrace it.

The analysis shows that the potential for AI to impact the Irish economy is slightly lower than the global average of 13.8 per cent, but higher than in many other European economies.

PwC says the impact of AI on productivity could be “competitively transformational and disruptive for the local economy” with the main economic gains to be driven by enhancements in consumer products.

The study finds that Ireland is currently lagging behind the rest of the world in terms of AI investment at just 36 per cent versus 54 per cent globally. The report’s authors say the State has the foundations to successfully adopt AI in the near term, but adds that the right investment in skills and technologies need to be made to translate this into longer-term benefits.

“The potential size of the AI prize on Ireland’s economy is huge, with significant but varied gains across all sectors,” said Ronan Fitzpatrick, PwC Ireland’s digital director.

“It is important that Ireland puts itself at the forefront of the AI revolution, investing in the skills and technology needed to successfully adopt AI into commercial business opportunities,” he added.

The adoption of ‘no-human-in-the-loop’ technologies that completely remove humans from some processes means that some jobs inevitably become redundant. But PwC said others will be created by the shifts in productivity and greater consumer demand.

The analysis concludes that it is likely that the effect on jobs in Ireland in the long term will at least be neutral, if not net positive.

“Much of the focus of AI to date has been on the impact that increased automation will have on jobs. While we expect that the nature of jobs will change and that some will be susceptible to automation, our research also shows that AI adoption may result in previously outsourced jobs being brought back to Ireland,” said Mr Fitzpatrick.

“AI will make everyday products better, more personalised and cheaper over the longer term, which we predict will fuel increased demand. Helping people do their jobs more efficiently with AI technologies and automating the more mundane and repetitive aspects will also increase Ireland’s productivity and is also likely to result in rises to real wages,” he added.

Labour-intensive sectors such as retail, wholesale trade, health and food services are likely to see the largest economic boosts from AI, in Ireland, the forecast suggests.

PwC’s report reveals that AI could add $15.7 trillion to the global economy by 2030 with China and the US likely to be the biggest beneficiaries with a 26 per cent and 14 per cent GDP boost respectively.