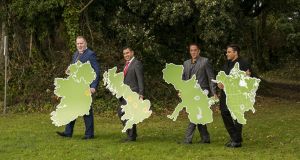 A new internet exchange has opened in Dublin, hoping to boost Ireland’s standing as a location for cloud, internet and content services.

British-founded Unifi-Ix switched on its international exchange in Dublin, bringing new connectivity to the city and making it the fourth city to be connected to Unifi-Ix’s 100-gigabit network.

The €600,000 investment is initially connecting what the company referred to as two “high-density” locations for data centres and telecommunications services, located on the northwest of Dublin and the southwest of the city.

The opening of the exchange will create five jobs in the first year, but may contribute to further employment indirectly as the the cost of connectivity falls. According to information from Unifi-Ix, savings of between 20 per cent and 70 per cent could be achieved.

The company is targeting global internet, cloud, social media, telecommunications and content network companies; with many multinationals based in Ireland, the choice of Dublin is a strategic one for the firm. Also on its list are indigenous companies who need high-speed, reliable interconnections.

The company was established earlier this year, with the goal of linking Europe’s “digital cities” with a global network that would enable lower-cost exchange of global and local data traffic.

Unifi-Ix’s network connects to four data centres in London, one in Birmingham and one in Manchester, and it is building its network in Paris, Frankfurt, Amsterdam, New York, Dallas, North Virginia and Dubai.

“Our new infrastructure will significantly reduce the number of steps needed to interconnect major cloud, internet and content services. This will provide a huge benefit to consumers, who will see an improvement in the performance of their online applications,” said Tom Sanders, managing director of Unifi-Ix.

“Our investment will help indigenous internet-oriented start-ups and increase Ireland’s attractiveness as a location for investment by multinational and internet-oriented companies. These digital businesses are looking to safely peer and exchange data at faster speeds with the world’s leading internet applications and services so they can better meet their consumer’s demands for high-quality voice over internet, gaming, content and social media services.”

“Its location is a logical mid-point between Europe and the Middle East on one side, and the US on the other, and this was a very important factor in our decision to invest here,” he said.

Michael Culligan, chief executive of Dublin Business Innovation Centre, welcomed the news of the investment. “ This investment reinforces Ireland’s reputation as one of the best locations on the planet to build cloud and internet application businesses. The launch will further support the vibrant indigenous software sector.”