Android Pay service set to boost use of mobile payments

App turns smartphone into contactless ‘digital wallet’ for use in shops 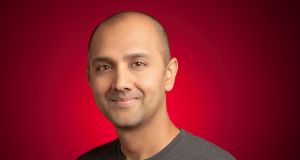 Pali Bhat of Google: “Irish users are so willing to try new mobile tech and solutions to make their lives easier.”

There’s still a way to go, but the launch of Android Pay on the Irish market could help boost the use not only of contactless payments, but of mobile payments as a whole.

The service, which launched in Ireland this week, turns your mobile phone into a digital wallet. Android Pay can be used with credit and debit cards, store cards and loyalty cards. AIB and KBC are the banks who have initially opted to come on board, but others are expected to follow.

“Ireland is a very important market,” said Pali Bhat, Google’s global head of payments products. “Our goal is to bring Android Pay to all countries where android is used, and Ireland definitely comes at the top of the list – not just because of retail infrastructure and the fact that it offers a great set of partners for us. It’s because Irish users are so willing to try new mobile tech and solutions to make their lives easier.”

The logic is simple:people already carry their mobile phones, so why not use them for payments. All retailers need is the capacity to accept contactless payments – and more than 45,000 already have it. Visa and Mastercard are also on board, which means the major payment providers are all involved. Once customers have the Android Pay app installed on their phone and have registered their card with the service, they need only tap their phone on the contactless payment terminal – the same as they would with their contactless cards.

“We want to make sure we can give Irish users an amazing and convenient way to pay with android phones. We’re excited about being able to deliver that,”said Bhat.

The first question that usually pops up concerns security. It’s a valid question – after all, smartphones are easily lost. Bhat said he believes it is a matter of education. “Mobile is more secure than using a card,” he said, citing a multifaceted approach to security. On the device, you are prompted to protect it with a PIN, pattern or fingerprint.

“We provide other layers of security too,” he said. “First, if the Android Phone is lost, you can use Android Device Manager to instantly lock the device remotely. You can secure it with a new password or wipe the android phone clean.”

There’s also the matter of handing over credit card details to shops. There have been a number of high profile breaches where retailers around the world have been hit by attacks that exposed customers’ financial details.

Android Pay, however, uses tokenisation rather than handing over your actual card number to retailers. This means they get a newly generated virtual number every time a device is used, even if you are using the same card over and over.

“If there is any sort of breach at the store, you’re protected because you haven’t shared your card info with them,” Mr Bhat said.

It’s not just about the stores. Malware – such as the recently discovered Gooligan issue – and security flaws such as Heartbleed could cause people to think twice before using mobile payments. If you root your Android phone – playing with the software kernel on your phone and customising it to your liking – you won’t be able to use Android Pay.

“With Android Pay we really thought about it very carefully at operating system level,” Bhat said. “One thing we do is that if there is a specific piece of malware or common things like rooting the android device – which makes it more vulnerable – we will detect it and disable Android Pay on the phone.”

Add to that sophisticated risk engines that flag potential fraudulent payments and it should be enough to allay security fears.

“Our goal is to provide choice with Android Pay,” Bhat said. “We made sure it can work with any enabled device that runs kitkat 4 or higher. The vast majority of phones will be supported.”