Jill Stein is doing US some service with vote recount bid 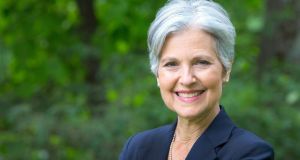 Having swiftly crowdfunded over $7 million (€6.5 million) for the purpose, US Green Party presidential candidate Jill Stein is in the midst of an effort to demand vote recounts in three key “swing” states – Wisconsin, Michigan and Pennsylvania – won by president-elect Donald Trump in the US presidential election last month.

The actions of a candidate who only won around one per cent of the national vote were quickly and predictably met with legal challenges by Trump in the states involved. These in turn have been countered by legal moves by Stein’s campaign, which this week filed a federal-level lawsuit to force Pennsylvania – which has a ridiculously complicated system – to conduct a recount.

The response of US citizens and political commentators to Stein’s recount push has been primarily bafflement or annoyance. After all, Stein herself has stated from the beginning that a recount was not expected to overturn the election result, primarily because the Trump voting margins, while slim overall in the three states, would be statistically unlikely to be flipped to votes for Clinton.

Why, then, should this massive recount be undertaken if it isn’t actually a serious challenge to an election result?

Such narratives ignore the reasons why Stein’s effort – if imperfectly executed and weakly articulated – is important.

Though one of the world’s longest-standing democracies, the United States, unlike many other countries, performs no audit of its national elections. But in an age of hackable voting machines and voter records, an audit of – at the very least – a carefully defined, statistically relevant representative sample of ballots should be the norm.

Everywhere in the world.

At the time of the US election, several eminent computer scientists and mathematicians made strong arguments for why an audit should be the norm, and – a crucial point of public misunderstanding –why voting machines can be hacked even though they are not connected to the internet.

These included John Bonifaz, the founder of the non-partisan National Voting Rights Institute (who personally approached Stein to spearhead a recount effort), Ron Rivest and Philip Stark, advisers on the US Election Assistance Commission (who wrote an opinion piece for the paper USA Today arguing for audits as the norm), and University of Michigan computing professor J Alex Halderman.

All felt that while the results may not be in question (even if the president-elect ranted without evidence about “rigged” elections before he won the electoral college vote and of “millions of illegal votes” in the popular vote he has lost), this election provided alarming evidence of attempts to hack IT systems to obtain information and influence the outcome by, most likely, Russia. The FBI stated Russia was likely behind the Democratic National Committee email hacks drip-fed through Wikileaks, and attempts to hack into voter databases in several states.

The states in question use Diebold voting machines that California banned in 2004, citing security and reliability concerns. This week, Michigan – where Trump won by a slender 10,000 vote margin – acknowledged significant machine failure on voting day, so much so that a recount appears impossible for much of the Clinton-leaning Detroit area. In Detroit, the number of ballots didn’t match the machine print-out reports in 59 per cent of precincts. Yet officials approved the results.

Mandatory audits by a non-partisan body would help pinpoint and address these human and machine errors, as well as help spot potentially serious hacking-era problems. This will boost voting transparency, security and reliability in state and federal elections in the US and should be adopted across the world.

Yes, Stein’s recount effort will have given the US Green Party more attention than ever in its history, and raised Stein’s profile, but this is beside the point. She has raised a critical issue that neither US Democrats nor Republicans have been willing to consider seriously. Only when Stein began to crowdfund did other politicians start to pay attention to comments by the computing and security experts.

Many who donated won’t have done so from any motivation other than to grasp at a very thin straw which they hope might yet deny Trump the election. But who cares? Stein has done the US nation some service by provoking an important discussion that goes to the very heart of digital-era national security and democracy. Hopefully, by the 2020 presidential election, Washington will have listened.