Now you can use your phone to buy things in shops 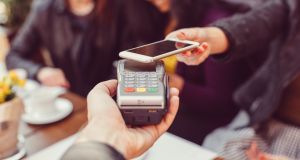 Android Pay is a mobile wallet that allows people with NFC (near-field communication) enabled phones, running Android 4.4 or higher, to pay for items on their credit or debit cards in stores with contactless terminals.

That leaves users with the option to pay with their phones at thousands of retail locations throughout Ireland including Eason, McDonald’s, Tesco and Spar.

Unlike contactless payments, customers won’t be limited to €30 transactions. Also, if the card issuer agrees, users will be able to pay for goods under €30 by simply waking their phone screen and holding it over the contactless terminal phones, but purchases over that limit will require users to unlock their phones.

The service will be available to customers of AIB and KBC initially, with other banks also expected to sign up.

Android Pay is a direct rival for Apple’s system, Apple Pay, which has yet to launch in Ireland. It’s more than a year since Android Pay launched in the United States, and six months since it began operating in the United Kingdom.

“We feel it’s going to provide Irish users with a lot of choice in using their device and being able to pay,” said Pali Bhat, global head of payments products for Google. “We expect Irish users to start adopting mobile payments en masse.”

The service can also be used to pay in mobile apps, with Deliveroo, Uber and Adverts.ie among the first to sign up.

According to Google, using a service such as Android Pay is more secure than using a plastic card, as it uses tokenisation to process payment details, which means the retailer gets a newly-generated virtual number rather than your real card number.