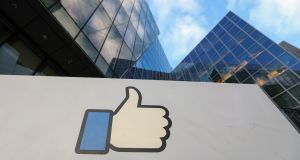 A survey published this year by a group that monitors hate speech found Facebook removed about 46 per cent of illegal content reported by users within 24 hours. Photograph: Bloomberg

A senior German conservative has warned Facebook it could face fines if it fails to act faster to tackle online hate speech, and he said the government could propose legislative measures in the new year.

Speaking at the party conference of Chancellor Angela Merkel’s Christian Democrats (CDU) in Essen, Volker Kauder suggested politicians were running out of patience with efforts by social media providers to crack down on hate speech.

“I expect from big companies like Facebook that they adhere to laws. If they are not respected than we must think about new possibilities, fines for example,” he said.

Germany is seen as a forerunner when it comes to forcing Facebook to step up efforts to police online hate speech, which has risen here following an influx of almost one million migrants, mainly from the Middle East, last year.

Politicians are also worried about how hate speech and fake news could sway public opinion ahead of elections next year in which Dr Merkel will be running for a fourth term and facing an increasingly popular far right.

Mr Kauder rejected an argument by Facebook – which has around 1.6 billion monthly users – that it is hard to quickly remove content due to the volume of data it has to deal with.

“They say there is too much. But a big auto manufacturer that produces millions of cars can’t say: ‘I produce so many cars that I can’t guarantee they are all secure.’ No, that is not on. I expect and demand from Facebook that laws are upheld.”

Last year, justice minister Heiko Maas set up a task force made up of representatives from Facebook, Google’s YouTube and Twitter as well as nonprofit groups to discuss ways to combat the rise in online hate speech.

The platform providers signed up to a voluntary code of conduct to take action to remove hate posts within 24 hours.

The results of a survey published in September by a group that monitors hate speech found Facebook removed about 46 per cent of illegal content reported by users within 24 hours, significantly more than YouTube and Twitter which deleted just 10 per cent and about 1 per cent respectively.

Mr Maas has repeatedly warned that he will propose legislation if the social media networks do not remove at least 70 per cent of hate speech by March next year.

Mr Kauder said Mr Maas, a member of the Social Democrats, Dr Merkel’s junior coalition partner, was being too easy on social media.

“We have a roundtable and now we must wait . . . but after the Christmas break is the end of the roundtables. We’ve sat at roundtables long enough. Now we want to see actions.” - (Reuters)

5 Will income taxes have to rise to pay for Covid-19 crisis?