Noisy and needy, kids will love it but it will drive parents to the verge of insanity 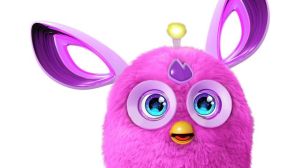 When I was younger, I desperately wanted a Furby. Who wouldn’t? They were cute, they chattered away in gibberish and they needed next to no looking after. It was like having a pet with zero responsibility.

Times have changed. Furby Connect still babbles on, oblivious to whether you are even listening. It sings occasionally. It makes inappropriate noises and fakes an apology, jigs around and thinks it is hilarious. Imagine giving your child a boatload of e-numbers, topping them off with a two-litre bottle of red lemonade and then letting them loose on the world. That’s what it’s like dealing with the Furby.

But Furby is no longer content to babble with another of its species. Now it desperately wants to interact with you. It want to be tickled, rubbed and played with. In short: it’s a bit needy.

Now Furby can tap into the zeitgeist, latch on to viral videos and convey its feelings with its bright LED eyes – all 100+ expressions – that are, at best, a bit unnerving. How does it do it? Furby now has a companion app, the Connect part of the puzzle, that it uses to find out what’s going on in the big bad world.

I should clear something up first. You don’t “need” the app. You can use the app without the Furby and the Furby independently of the app. If your child has managed to make it to this stage without becoming aware of the merits of Apple versus Android, the freakish Finger Family videos or Little Baby Bum nursery rhyme videos, then long may it continue. Although a straw poll in here reckons that should last about three more weeks, so make the most of it. Furby can live without knowing about “Chewbacca Mom”, the cat that plays piano and that guy who planked himself on the ice a few winters ago. The loss of such intellectual stimulation will be tough, but Furby will fill in the gap I’m sure.

All your child will miss out on, on the other hand, is raising a troupe of colourful Furby babies and watching their brand new toy defecating into a digital toilet, represented on your app’s screen.

Furby is a noisy thing. As soon as you put batteries into it – AA, four of them – it starts moving. And then it doesn’t seem to stop. After five minutes, I was politely asked to move elsewhere in the office. I already wanted to fire it out the window (the glass front on this building thwarted that – the windows don’t open).

It speaks a mixture of English and its own made up language, telling you in a sing song voice that it’ll be back, or “Oops, was that me?” Occasionally it mumbles something about being appropriate, or flashes some heart-shaped eyes at you. It won’t endear itself to you.

Your kids, inevitably, will love it. That will probably hit a peak when they realise that pulling its tail causes Furby to fart, long and loudly, in a sort of digital game of pull my finger.

There is one saving grace for parents. Hasbro saw fit to add a sleep mask for Furby, so you can pop it over the toy’s eyes and send it to sleep. True to form, Furby doesn’t do that quietly. It settles itself, mutters some rubbish and then starts snoring before it eventually switches itself off.

Or so you think. If you move Furby while it’s sleeping, it will protest a bit before settling back down. It’s primed for that moment when you creep into your child’s room late at night and accidentally kick it over, swearing the whole time.

Let’s be frank though. Part of parenthood is the endurance of noisy toys that “well meaning” people buy for them. Your main challenge is to see how quickly you can run the batteries down and how long you’ll get away with not replacing them. The Furby will be a very good testing ground for that.

As far as entertainment value goes, the Furby will probably keep your children busy for hours. By noon on Christmas Day, you’ll probably want to maim it, but they’ll love it. So you may just have to suck it up.

It never shuts up. There is no off switch, only the slightly inadequate sleep mask that mutes the Furby unless you accidentally move it.

The app certainly adds another dimension to the toy, although quite how worthwhile that contribution is, that’s a matter for you to decide.

Did I mention this isn’t for adults? Look at Furby Connect through a six year old’s eyes. It’s noisy and inappropriate, and you get access to a tablet. Thumbs up all the way.