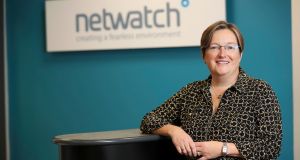 Wendy Hamilton will initially be based in Carlow. Photograph: Conor McCabe

Netwatch, the Carlow-headquartered security monitoring group with operations in the UK and US, has appointed Wendy Hamilton as chief executive to succeed its founder, David Walsh.

Ms Hamilton will step up to the to job from her previous role as vice president for global operations. She will oversee Netwatch’s expansion in the US, where in 2018 Netwatch merged with rival operators, NMC and CalAtlantic. As part of that process, Netwatch also merged with UK company, Onwatch, with the deals financed by private equity group, Riverside.

“The US market is crucial in terms of revenues and holds the largest opportunities for us,” said Ms Hamilton, who joined Netwatch in 2012 after previously working for software group, Lionbridge and IBM.

“Our operations in Northern Ireland and the UK are well positioned for the UK’s exit from the European Union. ”

Mr Walsh, who founded Netwatch 17 years ago and remains a director of the group and a shareholder, announced last summer that he intended to step down at the end of 2019.

He said at the time that the company “needs a US-based chief executive”, although Ms Hamilton will initially still be based at its hub in Carlow.

“It is envisaged that her US engagement will increase over time,” the company said.